When I think back to when I was the happiest going to the gym I immediately think about two places, the weight room at my college and Bally Total Fitness.  One was where I got my start as a clueless weightlifter, not knowing my ass from my elbow about anything and just using machines because they had instructions on them, and the other place was that major step up.  It was like my college weight room but it had more of everything and therefore I no longer needed to wait for someone to finish up or improvise by doing something else.  But what they both had in common is that they both had great, strong support groups, we all looked out for each other, helped each other to reach our goals.  It was incredible and I’ll forever be grateful for those days.

It was a year into my time at Bally Total Fitness when I met Mike Stanlaw in the fall of 2008.  He was a brand new trainer and I saw him watching me as I struggled with cable rows with the corner of my eye.  So in between sets he began talking with me, and I wasn’t sure what to make of him.  It wasn’t personal – I stopped trusting personal trainers after my experience with the jerks at LA Fitness.  But the more we talked I slowly began to see that not only did he actually know what he was talking about, but – GASP! – he actually liked what he was doing.  I even let him show me a variation of the barbell row!  Needless to say he made a great impression on me pretty quick!

Over the next two and a half years Mike trained me on and off (I think I was the first person in Bally’s he introduced to Dogg Crapp Training, which some guys like to use when taking a break from Max Overload Training and he tried to get me to hurt as much as possible with Calf Raises but he had no luck thanks to my calves already being pretty damn strong from years of being a pedestrian).  During this time Mike also became the head trainer at Bally’s.    Then, things changed.  He got a job at New York Sports Club in Bayonne, NJ, which is much closer to his home, and Bally’s sadly closed down and is now a Planet Fitness.  That’s when you know something’s wrong with the world.

Mike texted me last year, letting me know that he was getting ready to open up his own personal training studio in Bayonne and I immediately thought to myself that if you love something you’ll do anything in your power to make it a reality and that’s what he was about to do.  Things were delayed due to legal issues that I’m sure I can’t discuss here but Stanlaw Fitness finally opened up shop nearly three weeks ago.  I finally found the time visit the new place just two days ago and man it looks great. 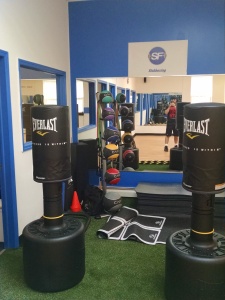 Holding true to Mike’s love of fitness, Stanlaw Fitness offers several kinds of training, from Bodybuilding contest prep to Zumba to Youth Training and so much more.  As of my seeing him he told me he already has 60 clients.  What was most awesome part was he took time out of his crazy ass schedule to train chest with me like old times.  We did five sets of bench, a set of pushups to failure, and then we capped it off with five sets of dumbbell bench with a Dogg Crapp style static stretch after the final rep – and all while hearing two of Randy Orton’s theme songs on Mike’s ipod!  My upper body hadn’t felt that tired in a long time!

If you live in the Bayonne area or you want to train with someone who is the real deal, who lives, breathes, eats, and sleeps health and fitness give Mike Stanlaw a call right now.  Yesterday, even.  For more info here’s the link to his website.

I’ve have thoughts about trying to open my own gym for the past four years now.  Not only would I be my own boss but I could do what I want with it, which obviously includes dictating the entire vibe of the place.  Who would my gym cater to?  How would I design it?  What equipment would I bring in?  And of course there’s also the music. I love hardcore gyms like the ones I’ve seen in articles and on youtube.  They cater to serious trainers, bodybuilders, powerlifters, you name it they are serious trainers.  I’d love to go to a place like Metroflex in Arlington, TX, with those SICK designs all over the walls, music blasting through the speakers and dudes likes Branch Warren training their asses off; a place like Pumping Iron not too far from me.  THAT place is Grunt City!  The first time I walked in there they grunted and screamed so loud they were cutting through the music!  These people were cutting through two big, 80’s era life size speakers! I train at a newly christened Powerhouse Gym.  The owner bought Atlas Gym from the original owner and is looking to renovate the entire building.  Thankfully, Mike, the new owner likes to play lots of rock music and some metal.  But of course he’s not going to play the good shit all the time.  I’ve already heard shit bands like Shinedown, Trapt, Limp Bizkit, Guns N Roses.  Yeah I included Guns on that list – overrated and pretentious as fuck if you ask me! But Mike does let us put our phones/mp3 players into the stereo system – just ask the guy who’s always playing his Eminem mix every Thursday night!  So one day I asked him if I could plug in my Spotify gym mix and he let me.  I need the heaviest music I can think of to amp me up, especially when I’m squatting and deadlifting on the same day.  This is my initial gym playlist called simply Gym Music:

Pretty heavy, right?  And I know a few guys in the gym that are metalheads but man, not even THEY could handle my shit.  Within a few songs dudes were bitching to me that what they were hearing is “garbage”, “dude you have any Metallica?”, “Why don’t you make a playlist where you mix it up so everyone could enjoy it?”.  Are you people fuckin’ pussies??  This is lifting music!  It’s not supposed to be Master of Puppets; hell, everything on this list fuckin’ buries ‘Puppets six feet under in terms of intensity! The best was when the music ended Eric, one of those metalheads, quietly said “Thank god it’s over!”.  Eric…I heard you buddy.  But that’s not even my problem.  Whenever I go to the gym a lot of what I hear is SHIT in plain English, but I don’t say a word because what right do I have?  Therefore, what right do they have to bitch about my music?  If you don’t like what you hear there’s a thing called HEADPHONES you pussies.  Man, if I had my own gym the music would be loud and heavy as fuck all the time.  And yeah, I’d probably scare a lot of people away…an exercise in weeding out the weak. Also… RIP AJ Pero 1958 – 2015