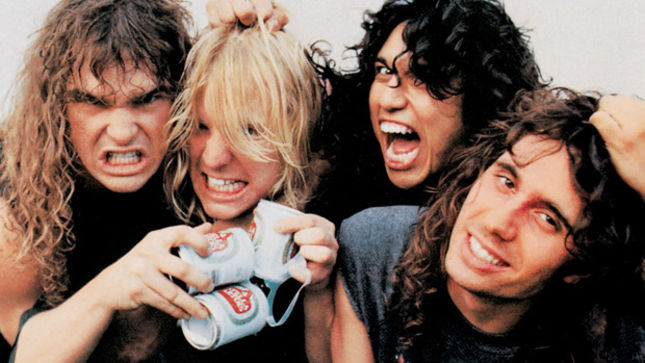 I’ve been wondering for almost five years if they’d ever get a fucking clue and just call it a day.  Then, this past Monday, Slayer made this bombshell  announcement amid rumors of a huge summer tour lineup including Testament, Behemoth, Lamb Of God and fellow Big Four band Anthrax:

Well damn.  There was just one thing for me to say….it’s about fucking time!  In my opinion this should’ve been done nearly five years ago, as I said above.  Why?  Nothing against Paul Bostaph who’s currently in his second run with the band, but the band’s treatment and dismissal of Dave Lombardo – especially by Kerry King – was just fucking disgrace by all accounts.  A few months later, guitarist Jeff Hanneman died of alcohol related cirrhosis of the liver.  While they had already been touring with Exodus guitarist Gary Holt for a few years while Jeff was recovering from a near fatal spider bite, they should’ve stopped everything right there.

I’ve spoken about this in an article ripping Kerry for calling Jeff “worm food” back in 2015.  Yeah, Kerry is a great rhythm player, he’s a really good guitarist, probably more technically sound than Jeff.  But Jeff was the better songwriter, having written “Angel Of Death”, “Necrophiliac”. “Spill The Blood”, “Postmortem” and the perennial set closer, “Raining Blood”.  Being that he was the one guy in the band that was more influenced by Punk than the others, his songwriting and playing style were far more reckless and chaotic than anything Kerry wrote.  Same goes for his lead style, just pure balls to the wall ripping.  It was never pretty and that’s why it was amazing.  Here’s an example, go to the 1:42 mark for Jeff’s solo.  By the way the music here is all his too.

I can spend this entire article kissing Jeff’s ass but here’s my point: like it or not Jeff was a KEY member of the band.  With him gone, Slayer was officially nothing more than a tribute band.  You know, that band that just goes out there for the money and play those signature songs they didn’t even write.  Because every time they play “Angel Of Death”, their SIGNATURE song, it just does not look right seeing Gary on the left side of the stage – and by the way this is not to disrespect Gary.

But it’s like David Vincent and Tim Yeung going out on tour as I Am Morbid (I seriously cannot stop laughing at that name!).  Yeah, David wrote almost all the lyrics to those classic Morbid Angel songs; but without Trey killing it on guitar it just sounds like a money grab before the tour even starts.  From a non metal perspective it’s the equivalent of Aerosmith touring and recording without Joe Perry or Brad Whitford – BOTH of the band’s guitarists! – for five years.  Who really gives a shit about Rock And A Hard Place?  Certainly not I!

While it’s clear to me that both Kerry and Tom Araya are the two business partners of the band, Kerry most likely is the one that pushed and pushed to keep going.  He’s much more shrewd of a business man.  But there’s one problem.  His songwriting style has changing DRASTICALLY since the earlier days, as he’s almost embraced shitty trends such as Nu Metal and it showed a little too much on 2001’s God Hates Us All.  Wanna know why I’ll never give Repentless, a complete listen through?  Because who in their RIGHT MIND wants to hear an entire Slayer record written by him?  And if you say you do you’re just a fan boy and should go die – fucking slowly.

Tom, on the other hand, made it clear several times over the years that at his age he’s become homesick.  He’s tired, and I think he’s kind of lonely without Jeff.  Starting in the late eighties/early nineties, Tom and Jeff began a songwriting partnership that produced some of Slayer’s best tracks, including “War Ensemble”, “Season In The Abyss” and my favorite latter era track, “Eyes Of The Insane”.  Jeff wrote the music but Tom wrote the lyrics.  Here’s a statement Tom made to Loudwire in 2016:

“At 35 years, it’s time to collect my pension. [Laughs] This is a career move.  I’m grateful that we’ve been around for 35 years; that’s a really long time. So, yeah, to me, it is. Because when we started off, everything was great, because you’re young and invincible. And then there came a time where I became a family man, and I had a tough time flying back and forth. And now, at this stage, at the level we’re at now, I can do that; I can fly home when I want to, on days off, and spend some time with my family, which is something I wasn’t able to do when [my kids] were growing up. Now they’re both older and mature. So now I take advantage of that.” Araya added: “Yeah, it just gets harder and harder to come back out on the road. 35 years is a long time.”

So I’m wondering if either certain business/contractual matters were finally resolved or Tom finally let Kerry know that he had enough.  I personally think that at 56 years old he’s burnt out.  It probably take it’s physical toll to scream like that every night at his age.  Or just maybe he has enough common sense to understand that things can NEVER be the same with Jeff gone.  Either way, the band has finally made the right call because at this point they’re more than beating a dead horse.  I almost want to see this farewell tour.  The lineup is fucking sick, and I can almost guarantee Anthrax is on there because they’ll probably have both bands on stage together at the end of every show to play a few songs together and it’ll be one big party as 2/4 of the Big Four.  Hell, even Dave Mustaine said he’d like to put together one last Big Four show as his way of sending them off.  Sounds actually really cool, considering the interband relationship between his own band and Kerry (Kerry was in Megadeth for five seconds before he got sick of Dave’s dictator-like approach).  But will they agree to it?  However, as I’ve hashtagged on Instagram posts for a while now, #nojeffnoslayer.

No Jeff, no Slayer.  He’s not there and I’m not interested.  Kerry and Tom, congratulations.  You’ve had an amazing career, creating a legacy that’s UNDENIABLE.  But please, after this is all over, make sure it stays that way.  Don’t be like that pro wrestler that retires then almost as quickly comes back because they can’t stand to be away – or need the money.  Here’s one of THE most fucked up songs the band ever released, written by Jeff: