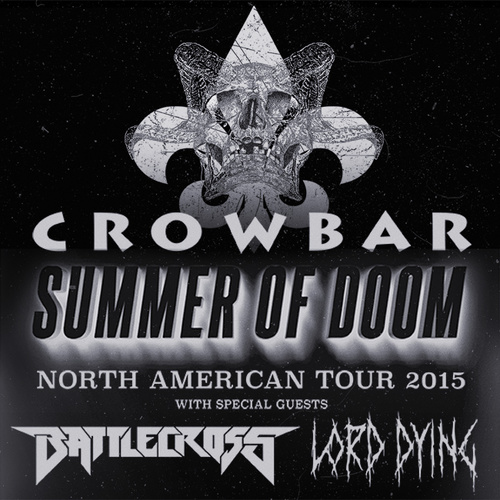 …ok so maybe that dying part is a bit exaggerated but if it got you to read this then my job is done!  Suck me.

Sludge GODS Crowbar came to town this past Monday night on their Summer of Doom tour, taking along with them Lord Dying and Battlecross.  It took so long to write about this because I needed a whole day to recuperate from the insanity that I’m going to write all about.  Then I had a very hard time uploading all my pictures and videos.  Why?  I couldn’t tell you, but I finally upload everything last night.  My videos from the show have been up for the last day or two though and I’ll put the link to them here of course.

I arrived there maybe before 7:30 so I could eat something.  I was walking up the block to find food and who’s coming toward me in the opposite direction?  None of than Crowbar founder/vocalist/guitarist Kirk Windstein!  I shit you not!  He and two other guys were headed back to the bar with food and I had a slight fanboy moment so I went up to Kirk.  He shook my hand and said hey in that gruff, raspy voice of his before going back to his conversation with his buds.  No big deal since I wound up with a souvenir from him later in the night anyway.

So I go back to the bar later and upon looking at Crowbar’s merch table I found this shirt.

This is so fucking true!  I myself wound up buying two shirts from the table but no this wasn’t one of them, although I think I should’ve gotten one for my girlfriend as a hint!

Not too long before the first band of the night, Carcosa, went on, I tried to talk to a few people and it felt a bit weird.  There were times where I felt like because these people didn’t know me they wanted nothing to do with me.  Not that I give a shit at all but this is something about metal that pisses me off.  It’s cool that there of groups of metalheads that found each other because that’s so hard to do; but what’s with the cliques?  I did met this one guy in a Down t-shirt who was a HUGE Crowbar fan.  Nice guy when I met him but as it turned out he was one of those pyscho fanboy types…you know the ones…there’s one at every show and that idiot always knows every little thing about the band including it’s day to day personal activities.  Well he turned out to be one of them.

While waiting outside I met Alex Bent, the current drummer in Battlecross.  We had a long conversation about all things music.  He and I and the crowd including the psycho fanboy were reminiscing about how we each discovered Crowbar and I good chunk of us said by watching Beavis and Butthead.  “Huh huh, I’d hate to meet this guy in an alley Beavis.  Huh huh.”  After a while it was time for him to go back in but he was cool enough to take this photo with me before he did.

I walked back in as Carcosa began their set.  They’re a band out of Long Island and this just happened to be their first show.  If I could describe their music I’d say a sludge/hardcore hybrid, not like Crowbar does but they were pretty heavy.  For their first show they were spot on, as if they rehearsed a lot.  I spoke to Tim, their lead singer at their merch table after they finished and he said this wasn’t even supposed to be their first gig but when they got the call how the fuck could they say no????  They’re one of many bands I’ve noticed selling their music on cassettes, primarily because they’re cheaper to make than CDs according to what they guys in Ajax told me last July.  For $5 I got a cassette with a free digital download card along with two stickers.  To hear it for yourself go to http://www.carcosali.bandcamp.com and you’ll find the entire demo. 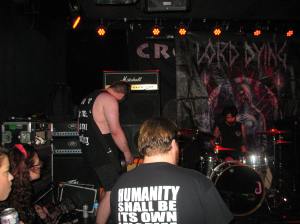 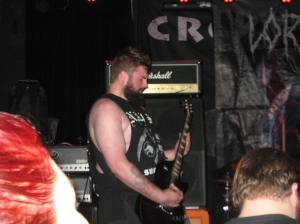 I had more pictures and even a video but for some reason my memory card filled up quick and I didn’t even have many pic taken yet at that point.  This would be cause for a lot of frustration throughout the night.

Next of was Lord Dying.  This is was a close as we were gonna get to Crowbar before Crowbar even hit the stage.  It was heavy and sludgy…but with harmonies and solos.  They actually impressed me a lot and I will but their shit.  Erik Olson’s vocals were angry as FUCK and the music just pounded you. 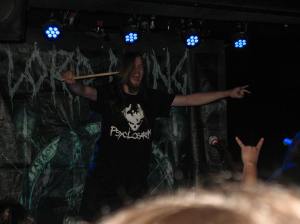 At the end of their set I spoke to Chris Evans, their co-guitarist, who let me take a picture of him with that beautiful custom made guitar you see both guys with in the video I posted.  He even let me hold it, that thing is light as a feather.  I wanted to try and balance it one finger!

Battlecross were next and the last band before Crowbar.  This was the thrashiest, fastest and most melodic band out of the entire lineup.  They were still intense but in a different way and it’s safe to say the definitely have a following because this was the time when the room were in in truly began to full up.  From “go” the band were non-stop.  Their music was fast and while i had heard some of their songs before this night just so I could be familiar with them, they really impressed me live.  Also, it’s good to know there are bands out there with a sense of humor because Kyle Gunther was absolutely hysterical at times.  When I met him afterwards I should’ve suggested he try standup comedy. 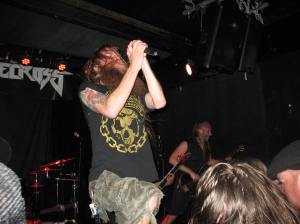 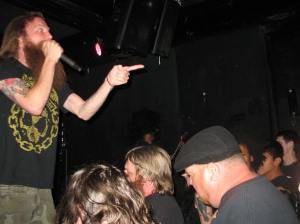 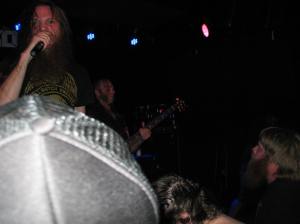 Here’s where problems began.  My phone’s battery was dying so my video for Battlecross was cut off after a minute and a half and my camera’s memory card was mysteriously full.  I’d fix the camera issue later but I couldn’t charge my phone obviously.  But here’s the video I made because it did come out good, at least.

Some people were crazy enough to clear the room after Battlecross got off the stage.  I guess they wanted to get one last smoke break, I don’t know.  I just know that there was a great open spot right at the front of the stage and I took it quickly.  While Alex was taking down his massive drum set – the biggest one of all the bands! – I befriended the guy standing next to me, also named Mike.  Turns out he’s huge Crowbar fan – no not like the psycho fanboy.  Kirk Windstein got on stage to set up and he drops the setlist on the floor and reading it Mike and I got real giddy, like teenagers, just knowing that shit was going down tonight.  I mean…just…just look at this fucking setlist! 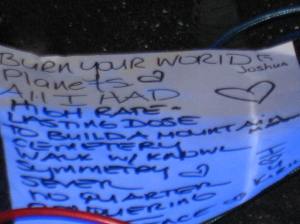 After just ten minutes Crowbar finally hit the stage.  I think you can just look at the picture above to figure out just how fucking crazy shit got based on the song being played but trust me, seeing is believing.  I was only able to take a few pictures because I got banged around a bit being that I was at the front.  I mean I was right in front of Kirk Fucking Windstein and practically getting an upfront guitar lesson!  If I can’t play any of Crowbar’s shit after this show I need new glasses now.  So here are the few pictures I was able to take, just to get it out of the way. 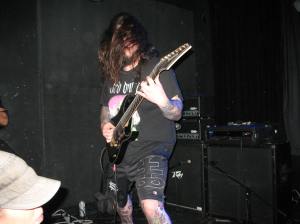 So when the band began playing the place turned into a heavy metal lion’s den of dudes jumping off the stage – especially that psycho fanboy!  He kept on trying to push his way in and knocking me away from the front but I wasn’t letting that happen.  But I did pay for it because his breath smelled like fucking shit!  Mike smelt it too as did the woman standing to my right!  I have a video of the the second and third songs they did: “Planets Collide” and “All I Had (I Gave)” and before the “All I Had…” ended the fucking camera stopped on me again!  But I’ll tell you what…as crazy as we all were – I mean Mike and I were laughing so hard at how crazy everybody was and how heavy as FUCK the band were – shit really went down at the breakdown to “All I Had…”  It’s as if nothing else matters after that song.  This was where the whole fucking place just caved in.  For real.  Here’s the video of it.  The sound’s fuzzy because I’m right in front of Kirk but just fast forward to the 8:16 to see it all.

It was an extremely intense show.  And if shit couldn’t be more out of control the band broke into the intro to “The Lasting Dose” and played it even slower than it already is.  That just made everyone’s blood boil because they just wanted the band to kick in so they could beat each other up some more.  I fucking loved it!  I’m pretty sure it was that song were some jackass jumped of the stage and landed right on my shoulder.  And not even five minutes after that I felt someone kick me in the back of the head.  The woman next to me asked me if I was ok and I saw that psycho fanboy crowd surfing, so I immediately figured out that it was his foot that hit me.  She and I both wanted to fuck him up because he kept on jumping our direction AND his breath smelt so fucking rancid.  Rushing to the stage to show he knows every single word before jumping on us again and again.  I was ready to hurt him.

The show was SICK.  Crowbar were so fucking heavy.  This really is the music you listen to to get fat!  If I wasn’t sick I would’ve totally been motivated to lift weights the next day because they gave me such an adrenaline rush.  This is the music you shit dead babies to.  Fuck it – this is the music you EAT babies to!  They ended the night with “Existence is Punishment” and just when you thought the crowd were tired from beating the shit out of each other they got right back into it just like that.  I’ve never seen anything like it in all the years I’ve been to shows.  I’ve seen things close to this happen but the difference was that at all those other shows the crowds calmed down at least a little after a few songs.  Here?  No.  Just…no.  At the end of the show I jokingly thanked Kirk for the free guitar lesson.  “Free guitar lesson, huh?”, he asked on the mic in the raspy ass fucking voice of his.  He then let out a smile and gave me this sick looking guitar pic out of his pocket. 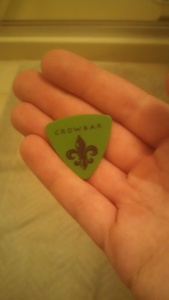 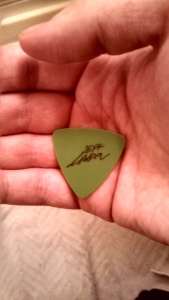 This again was such a fucking sick show…the single most intense show I’ve ever gone to so far.  I plan on going back to Saint Vitus this Monday to see Goatwhore, which ironically enough was formed by former Acid Bath and Crowbar guitarist Sammy Pierre Duet.  That’s a band that puts on a sick show but I know that it won’t be the same as this.