If it wasn’t for the fact that I want to become a personal trainer and wasn’t contracted to New York Sports Club I’d most likely try to find another gym.  I don’t hate my gym but I’d really like to train somewhere that’s more geared toward my goals because let’s face it, a commercial gym doesn’t cater to Powerlifters or anyone strength training related.  Hell, there’s only one power rack for squatting and just one deadlift platform – I do admit it’s a miracle they even have on.  But sometimes it’s being used just as you’re about to use it and sometimes it’s for some real stupid shit.

On the night I was to Deadlift 315 for the first time ever back in February I found someone was occupying the platform doing a stupid Crossfit routine.  What was it?  Ten sets of twenty Clean-And-Jerks followed by “jump rope”.  Noticed the word jump rope was quoted?  That’s because there was no jump rope; instead this guy was jumping up and down looking like he was jerking off two dicks!

My most recent favorite, which I ranted about on my facebook page, was the guy doing Front Squats with a fucking BOSU ball.  First off, if he’s going to be wearing the wrong shoes – by which I mean sneakers – he better hope I’m not there when he tips over because I’m going to laugh so hard.  Also, if you’re front squatting with a BOSU ball you should return your man card and go make that appointment for your sex change now.  Hell, yesterday.

I finally ordered a 10mm Inzer Forever Belt in black on Saturday.  I hope to get it before my next deadlift day.

So Nails cancels all their shows over the summer without any explanation and we hear nothing for two months…and then I was told a few days ago by one of my YouTube subscribers that it was announced the Nails and Full Of Hell are releasing a 7″ split???Don’t get me wrong, I’m fucking stoked about this – that’s going to be some nasty fucking shit!  But dude, what the fuck?  I wrote about how confused I am on facebook because we had no idea if the band were back or what and when I reposted it on my new Instagram account I received this funny little response from Closed Casket Activities, the label releasing the spilt: 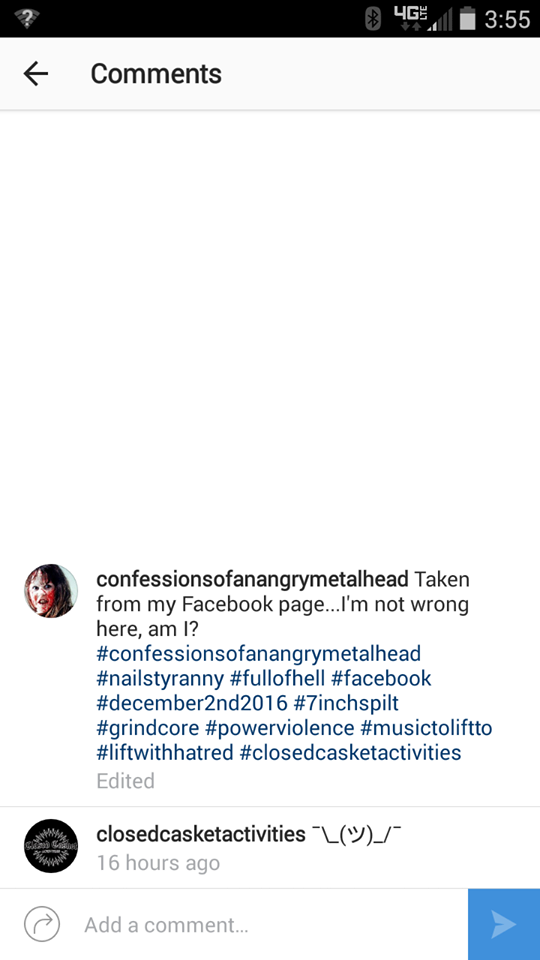 Funny guys.  Then I saw this today on Metal Injection:

NAILS To Play THE POWER OF THE RIFF Festival In December

If one thing’s for sure, they’re right about one thing: You Will Never Know What’s Going On.

Confessions Of An Angry Metalhead

Also, as I mentioned fleetingly a few paragraphs ago, I’m now on Instagram.  Be sure to follow me on there, I post shit daily on there.