What a ride it’s been for Lamb of God vocalist Randy Blythe over the last few years, huh?  He’s been through hell and somehow avoided a lengthy prison sentence for the death of a fan during a concert in Prague back in 2010, having been acquitted in 2013.  I know I wasn’t the only the only one to be relieved for him when the news came that he would come home.  I personally put the blame on the security guard and the fan himself.  I don’t do moshpits but if I were in a Suicidal Tendencies show or a LAMB OF GOD show I sure wouldn’t be drunk because I know I’d have to be VERY aware of all the other jackasses ready to clobber you.

I was well aware of his upcoming prison memoirs Dark Days, set to be released this July, by the time my girlfriend, Courtenay, told me that she was invited to his photography exhibition Show Me What You’re Made Of at Sacred Gallery in Manhattan this past Saturday, May 2nd.  Whoa, wait.  Randy Blythe?  Photography?  I already knew that he’s ridiculously intelligent, and I’m so looking forward to buying his book.  But taking pictures too??  My girlfriend HATES Lamb of God so much but was so happy that he was able to come home, and was interested in seeing his work.  I, of course, LOVE Lamb of God AND was so happy he came home.  The kicker?  My girlfriend was issued a permanent VIP pass by Kevin Wilson, the manager and defacto owner of Sacred Tattoo and Sacred Gallery, and therefore we could get in an hour ahead of everyone else.  Of course we were going!

While waiting on line that night we met a college kid named Alexander, very nice…very talkative.  Well, either that or he was trying to avoid the two seventeen year old dumb fucks in front of him on the line.  In fact if you check out Metal Injection’s coverage of the exhibition you’ll see they even interviewed him during the halfway point of the story.  I just wonder if when the reporter was trying to go somewhere else this guy still wasn’t done talking!

Around 7pm we were able to go in for a private viewing thanks to Coutenay’s VIP pass and need less to say I was absolutely blown the fuck away.  He’s a natural!  Randy has been apparently taking pictures for years, maybe a year or two before the Prague incident; he found the time to explore the surroundings of whatever city or country he might’ve been in a the time and just capture some breathtaking shots.  Not to blow smoke up the guy’s ass but he definitely has a knack for timing, which is all too important when you shoot moving images. 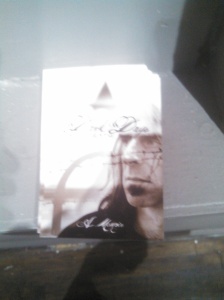 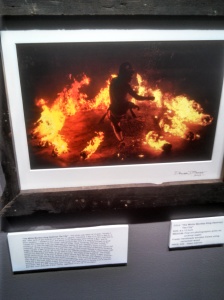 Notice that the frames are a little…old looking?  A little beaten up?  Maybe…even old as fuck…like it was a piece of something else a long time ago?  Well, you’d be right!  These frames are courtesy of Frames by Greta.  Greta Brinkman, a carpenter turned frame builder takes old pieces of wood and turns them in to picture frames of all sizes – rather than just throwing them out.  She also happens to play bass for stoner metal band Druglord from Richmond, Virginia – Randy’s hometown. 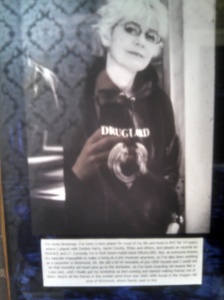 I actually spoke to Randy for a few minutes and I tried to get him to explain to me how he edits his shit because it was so good and he told me that there was no real editing involved.  Most people would yell “arrogant prick!” but he didn’t come off to me that way at all.  I was almost offended again when he just ditched me but I understood he was getting pulled away because some couple bought a picture.  While there I ran into my friends Jimmy and Peter Pallis, the singer and guitarist from Brooklyn based metal band Anaka.  If you’re in the NYC at all you should check them out when they play the Gramercy Theater on Saturday, June 27th. 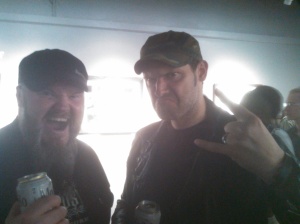 Everything was cool until some lanky 6 foot 8 fucktard arrived.  I had a feeling he looked familiar, especially after everyone sitting on the couch next to mine began taking pictures on their cellphones.  Then I heard him talking – loud as fuck – like some surfer stoner shithead with this gay looking red hat and this long, doofy looking jacket.  My first reaction: “This motherfucker’s still alive?!”  Remember Jesse Camp everybody??  The first MTV I Wanna Be A VJ contest winner from 1998?  This was him and man he looks like SHIT.

He turned his head as my camera was taking the shot but he looks a lot older than 35.  Drugs are a bitch, eh?  But aside from that he was acting the same, talking the same, the STOOPID hand motions.  Oh yeah.  He was doing a video on the exhibition and he was interviewing Acey Slade, who was the DJ for the night.  I’m not a fan of anything Acey played that night but man it was way better than ANY of the bands he’s ever played in.

This video was taken right before I finally got a picture in with him.  Funny guy.  I went for the selfie pose when Randy decided “Ok that’s way too close.  Here!”  He then takes the phone from me, reaches as far back as he could with his lanky ass arms and takes a really good picture.  “And…walla!  There’s your picture!”, he said before he went off to take more pics.  The smart ass style of the way he said almost pissed me off – again.  But then I remembered “Oh wait!  I probably would’ve done the same thing!”.  That Randy, funny guy. 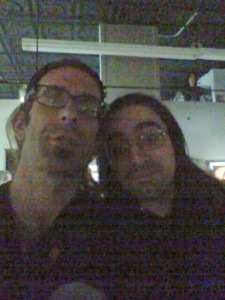