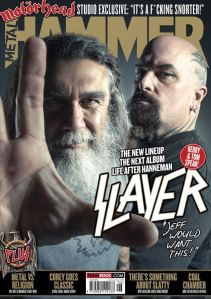 …really guys?  Because I don’t!  There’s a lot I can say about the latest Metal Hammer.  I can talk about Kerry and Tom’s take on the Dave Lombardo situation, the fact that this really isn’t the first time Paul Bostaph was in the band, the fact that Gary Holt is pretty much a Slayer member at this point.

But all I really care about is that stupid quote on the cover of the mag.  Why?  Because I don’t know about you but I’m not looking forward to a whole album written by Kerry King, no fucking way.  And I know I’m not the only one either!

Jeff Hanneman, Slayer’s fallen guitarist – I still miss him so much! – was the guy that kept Slayer raw as FUCK.  You knew damn well when a song was written by him because it was usually so fucked up.  HIs shit was real; it came from inside because, unlike Kerry, he wasn’t listening to bullshit nu-metal or trying to fit in with what might’ve been popular, especially in the early 2000’s.  He also came from a family of war veterans which meant A. He knew exactly what he was writing about at all times and B. He was able to write about more than just blood and death.

Jeff’s punk rock background also gave him that ability to write music without limitations.  His solos are way more off the cuff than Kerry’s ever were.  I’ve yet to hear another guitarist solo off key and make it fit the song perfectly – but Jeff could do it.  Oh, and back to the brutality thing, Jeff has a major one-up on Kerry – he wrote “Angel of Death”, one of the most brutal and fucked up songs off all time.  Kerry could never get the band in as much trouble as Jeff did with THAT song but hey, there’s no such thing as bad publicity when you’re in Slayer.  Jeff also wrote some of Slayer’s most memorable songs: “War Ensemble”, “Dead Skin Mask”, “South of Heaven””Postmortem”, “Raining Blood” – the starter for every pit….ever.

I mean no disrespect to Gary Holt but Slayer should just call it a day.  They’ve accomplished more than they could’ve ever dreamed of as band with songs like “Necrophiliac”, but Kerry writing the whole thing already makes the upcoming album sound so one dimensional to me.  Gary obviously had no input in this – and he shouldn’t.  When Jeff died the band lost it’s raw edge, that let it loose spirit.  Some of you might say that about Dave Lombardo being out again but this article isn’t about him because he left the band once before and he’s still breathing.  Even my friend Idrees, the biggest Slayer fanboy you’ll EVER know finally saw the light, telling me this past December that even HE made peace with the fact the Slayer are done.  Oh, and you’ll read more about that guy soon.

Anyway, I don’t know about you but as far as I’m concerned, I feel like Tom Araya and especially Kerry are just keeping the band alive for no other reason but to keep cash flowing.  I don’t know why Kerry doesn’t try the side project he said he always wanted to do with Zakk Wylde.  Kerry, you guys are toast, just let it go.  Here’s how I’ll always remember Slayer…with a Jeff song: