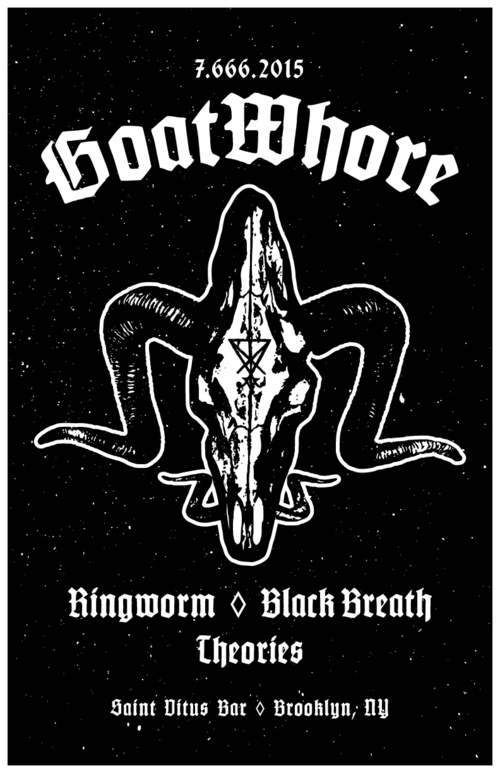 It’s been a few weeks since this show happened but I took awhile to finally do this blog partially because of time constraints, partially because of the fact that a lot of things happened at this show, partially because I was sure some drunk piece of shit blatantly sabotaged one of my video of the Black Breath set but as I now know she failed.  But I’ll get to her.  I’m doing this post a little differently than my other posts because there was a lot to cover so I’m going to recap this as quick as I can and then list the bands and I’ll add their pictures and videos that way.

So I arrived at the bar a good half an hour before the show was supposed to start and within maybe ten minutes of my being there I recognized the woman I was standing next to during the Crowbar show just a week earlier.  She had checked on me after the psycho fanboy kicked me in the back of the head and she now revealed to me that her legs at that moment we were talking were still bruised all over from that night.  We both spoke for a bit about the crowd as a whole that night, how brutal that show in general was because that pit wasn’t really a mosh pit – it was one big fucking fight!  See the video on my post about that night see what I’m talking about!

The first band of the night was a band called Theories, who are out promoting their latest album, Regressions.  I recorded the first few songs of their set which I will post.  They weren’t bad.  I don’t know that I’d buy their stuff but but I’d definitely see them again.  I’d say that their singer should definitely work a little more on coming out of his shell with his stage presence.  I imagine it will happen over time.

Ringworm were next and all I can say is…OW!!  There’s a reason James Bulloch is the “Human Furnace”.  Damn.  The band as a whole were absolutely brutal…so much so that that this where the circle pits and even some idiotic dancing began!  I stood to the side of the room while filming to avoid getting hit but some retard who was dancing around like a spaz  threw himself in to the guy next to me, who obviously bumped in me, hitting me right in the ribs and forcing my thumb to turn the camera off.  Within a minute or two of starting over I knocked into again twice, tailbone first in to the wall both times so this time I just got out until the band finished.  Again…OW!!!  By the way as of this writing my tailbone STILL hurts.

Black Breath…where shit went down.  What’s in a name?  That’s what I need to remember when it comes to Metal bands because these guys shattered all my expectations and fucking killed it! I couldn’t even use the word brutal to describe their intensity on stage.  They were PERFECT!!  So what was the problem?  I had gotten a brand new Droid Maxx just a few days earlier so I was unaware when filming that there was an automatic light that I had to remove.  So while I was filming there was a light on the whole time so I was a little confused when the woman in front of me began giving my phone the finger and then gave me the finger.  Of course I gave her the finger back.  She then turned to me and told me that the light on my phone was really bothering her and I was “making everything suck”.  I understood and kindly asked her to give me a minute so I could find a place to move and I guess that wasn’t good enough for her so she pushed me.

I didn’t do anything only because I assumed she was a bit drunk but the fucking bitch did it again!  When I was done filming she and her much calmer boyfriend thanked me.  I politely approached her and told her that there was no reason to push me.  “Well I tried to reason with you and you wouldn’t listen so I’ll push you all I want!” was her immature reply.  I called her out on it and she declared “I’m not afraid of you!”.  I never threatened her.  She then tried to insult me again and gave up.  It’s incredible, how tough women act when their boyfriends/husbands are around, although part of me thinks that this drunk bitch wears the pants in the couple.  And by the way you dumb twat, if you’re reading this I hope you get shot repeatedly in your fuckin’ head!  I do have to acknowledge the guy behind me, who saw everything and offered to lend me his spot so I could continue filming, but I was already finished at that point.  If you happen to be reading this, thank you bro, it obviously wasn’t forgotten.

After I took a few deep breaths in amazement that I didn’t punch the drunk bitch in her throat I got ready for Goatwhore.  I slowly got more in the mood the longer I heard Venom’s song “In League With Satan” blasting through the speakers…so bad but so good!  I was getting ready to film again and when I saw the guy in front of me looking up at my phone I decided to stop and look at the problem.  That’s when I discovered the light and turned it off – it still doesn’t justify some dumb bitch pushing me.

Goatwhore got on and they fucking tore it up!  I personally feel that leaving Crowbar was the smartest move Sammy Duet ever made; he’s a totally brutal, loud, heavy guitarist.  Let’s face it – he never would’ve been able to truly express himself had he stayed.  That’s no disrespect to Kirk Windstein, but when the band you’re in is the product of one guy’s sole vision you’re not going to have an easy time getting your ideas out there.  The good news here was I was in a spot were I was able to avoid injuries this time and STILL see the band!

This is actually the third time I’ve seen them in the last eight years and the second time I saw them while on tour for their latest album, Constricting Rage of The Merciless, an album I recommend HIGHLY.  Someone once said that Goatwhore is exactly what Venom would have sounded like if they weren’t such a joke and I couldn’t agree more.  The place really came apart near the end when the began their song “FBS” (right….I don’t know why they didn’t just label it what it is.), of the new CD.  At the end of the night everyone knew what is was to get Fucked By Satan…and they loved it.