In the last few years I’ve seen some real STOOPID shit while in the gym.  I won’t lie, I did some unnecessary shit in my early twenties; but I NEVER did half of what I’m about to talk about here.  Fitness, and getting in shape, or whatever the fuck your personal goals are should be fucking simple as shit.  There shouldn’t be any weird dancing with weights, or balls, or misuse of equipment.  And fuck, the way some of you misuse equipment meant to act as a REINFORCEMENT is fucking ANNOYING to see.  So here before you is a short list of shit I want to stop in the gym – ANY gym.  Yeah, even my own gym isn’t safe from some of this shit.

This is something I saw someone in my current gym do months ago while trying to regain my own squat strength post wrist injury.

First rule of ANY kind of real lifting: DO NOT FUCKING WEAR GLOVES YOU LITTLE BITCH!  If you’re stupid enough to do so, I can only assume grip strength isn’t important to you.  Aw, are you afraid of getting callouses?  Have fun never getting strong!  But more so than that, if you “need” to wear gloves for an exercise in which the bar is to be ON YOUR BACK, then you’re not doing it right.  In fact, your wrists are NOT supposed to have ANY pressure on them.

I forgive you if you’re brand spanking new to weightlifting.  You’ve yet to be privy to the importance of true quality materials involved in making real belts.  You may not yet even understand that it’s better to learn how to work on strengthening your abs, using that as a “natural belt”.  For the rest of you, I honestly hope those fucking Harbinger belts either dig into your ribs while you’re squatting, or they “fail” you because you probably don’t know how to brace.

I honestly feel like all lifters, regardless of whether or not they are bodybuilders or powerlifters or whatever, need to have a belt that is just one length all the way around, and made of leather.  I, for example, have an Inzer 10mm Forever Belt.  But there a few other brands you can by quality belts from, such as Pioneer Fit.  You can either take this advice or just look like a jerkoff…up to you.

If you’re reading this I’d like to think this is self explanatory.    But if not: if you’re using fucking KNEE WRAPS to squat 225, your squat probably sucks ASS.  Especially if you’re not at least breaking parallel!  Just imagine you’re shitting in the forest, or even do what I did and actually ASK for help.  Some people like to do box squats as a reinforcement – remember that word?  I personally don’t care for them because I feel like it allows the hamstrings to relax and lose tension, but that’s just me.  But this actually leads to my next example of gym stupidty!

I actually saw some tool do this in NYSC in Clifton, NJ two years ago.  He was front squatting with sneakers onto a medicine ball.  First off, if you’re front squatting with sneakers, you better hope I’m not there when you tip over because I’m just going to laugh.  A lot.  Find someone else to help you.  Also, if you’re a man squatting onto a medicine or BOSU ball, do yourself a favor: return your man card right away and make an appointment yesterday for that sex change operation you’ve secret wanted since you got out of high school and entered college, the time where most jackasses finally feel free to wave their jackass flags high!  Fuck, even another woman told me “…I thought only chicks squatted onto BOSU balls…”.  See guys, don’t be that douche with the surfer boy haircut squatting onto a BOSU ball.  Find a box or a small stool or even a bench like a real man.  You are a real man, right?

Arnold didn’t have bitch ass medicine balls in 19 whatever the fuck year this was taken in.  And he didn’t need them either, and neither do you unless you’ve begun hormone treatments to grow your tits.

This goes out to all you certified personal trainers out there…or at least those of you that only based your knowledge on your ACE or NASM textbooks.  Yeah, I’m a newly certified trainer – but at least I know that the only way to get someone to do a squat is to keep him or her STABLE and not moving around like an asshole.  Or on a BOSU ball.  Or anything that’s not a SOLID surface.

That’s exactly what I thought when I saw I personal trainer at my last gym (the subject of my inaugural Lift With Hatred article) “teach” his middle aged client this absolutely retarded squat “variation”.  He gave his client two 10lb dumbbells to hold up at shoulder length.  From there, he made him do a squat, then turn 180 degrees to do another squat, and repeat the process.  Fuck, at that point this poor fuck wasn’t learning how to get in shape.  He was learning weighted fucking ballet!  That shit would get me nauseous!

I don’t give a shit about your certification.  I could give two fucks about your knowledge of Golgi Tendon Organs.  If you have any kind of intelligence or even just a little common sense, you’d know that “functional training” is simply performing exercises that mimic everyday life.  That includes the squat and deadlift.  So if I’m picking up a box in a warehouse, am I going to spin around with it like some faggot on Dancing With The Stars, or am I going to load it up on the 18 wheeler like a normal person?  If you said spin around like a jerkoff, then you deserve to get shot in the head.  Twice.  You want to have your clients do a dumbbell squat?  Simple.  Have them do a Goblet Squat: dumbbell to the chest and squat for reps.  It’s easy and effective.

Look at that shit – so easy your dead great grandmother can do it! 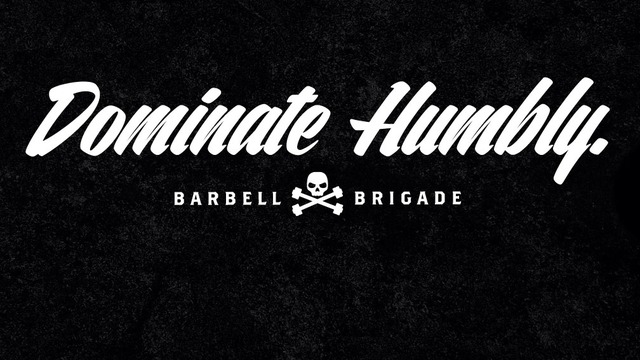 Due to the success of certain YouTube fitness channels, the owners of those channels began selling shirts with their dopey slogans on them.  Of course they sold.  Of course most of these people are absolute toolbags comprising of either bro lifters or fuckheads who only got into Powerlifting because it somehow became trendy.  I want to talk about Barbell Brigade first because I’m going to be less brutal on them than I am with Beastmode.  Barbell Brigade, honestly, looks like an awesome gym that I’d love to train in if I’m ever in that part of California.  But “Dominate Humbly”??  Who the fuck ever dominated ANYTHING with humility?  That’s like a dude starting to brag to his friends about the girl he just boned the other night but the surprise twist was that SHE asked HIM who his daddy was and he liked it as she pounded HIM into submission!  He also probably wore a man bun.  He’s also probably about to go get a sex change.

I honestly have no clue who started this #beastmode shit years ago.  I just know that it sucks ass.  Like your mother.  I also know that it’s not only a silly way of saying you’re going hard at the gym, or even at life, or “grinding” (don’t get me started with this stupid term), but it’s another excuse to record yourself on your phone to get YouTube views or Instagram likes.

But what’s hilarious about Beast Mode is…what the fuck are most of you doing that’s so impressive that it justifies a stupid hashtag.  Between videos of bros lifting and pictures of dudes with their shirts off, showing off their upper bodies, you’ve all missed the point.  From the time I started training to now neither I nor my friends ever yelled out “yeah man lets go fuckin’ beast mode today bro!”.  We just went in there, did our shit and when home.  No bragging, all work.  You’ll never go on Dan Green or Shawn Roden’s Instagram pages and find #beastmode on their posts.  Why?  Because they don’t need to put that for everyone to know how hard they worked to get to where they both are now.

Chances are, a good chunk of you probably, are lying through your fucking teeth about exactly how hard you actually work.  I bet that, instead of “grinding” you probabky spent most of your time on your phones.  You probably are clueless when it comes to programming your training for consistent, long term progress.  Your body can be forced to be in “Beast Mode” for only so long before it’s had enough and you either stagnate (the nicest thing that can happen to you) or you get hurt from overtraining because you didn’t schedule a lighter or medium/light week.  Or even a deload week!

The saddest thing about “Beast Mode” is that some older guys have drank the Kool Aid.  Earlier this year I saw a guido looking dude at my gym, looking older than even I, with a gold chain on…and a Beast Mode tank top.  If you’re a man looking close to 40, and you’re wearing a tank top that says “Beast Mode” on it, you most likely haven’t experienced the love a woman in a really long time.  After this you have two choices.  You can either A) throw yourself in front of an incoming train, or B) go make an appointment for a sex change with the guy squatting on a medicine ball.

I’ll never forget this night for as long as I live.  February 16th, 2016.  New York Sports Club, Clifton NJ.  I was hyped up, as I was was preparing to finally Deadlift 315 for the first time (I did so for four reps, by the way).  The problem?  The deadlift platform was being used by a middle aged man.  I asked him how many sets he had left and he explained to me that, as per his Crossfit routine (that should already be a warning!), he was set to perform 12 sets of clean and jerks followed immediately by jump rope.

Sarah Palin at least got it right.  Why can’t you?

One thought on “Lift With Hatred: Stupid Shit In The Gym”