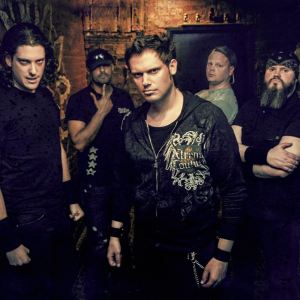 I recently got tickets for Anaka’s next show, a headliner at Gramercy Theater in Manhattan on the heels of their latest album, The Unwavering, that’s happening next Saturday, June 26th with support from Brand of Julez and Tempest City.  If you don’t know who they are they are an aggresive as FUCK metal band from Brooklyn.  I started talking with Jimmy Pallis, the band’s singer on facebook about four years ago; when the conversation went into Megadeth and how they essentially lost their balls after Youthanasia (some of you would say otherwise) I knew this guy was the real deal!

So we exchanged numbers and as it turns out this and his guitar player brother, Peter Pallis, are so into connecting with their fans that they will have no problem driving to you to sell you tickets.  This was the case last week when I bought my tickets for this upcoming show.  Not a lot of bands do that.  It was a funny few minutes.  They’ve been on the scene a long ass time and when i told them about my blog post regarding my first metal concert and brought up a few old names the jokes just started flying.  Fuck…Jimmy…Peter…we’re old.

If you want a good time and are in the area next Saturday I’d definitely recommend seeing them.  A great live show with a very loyal following.  Quick story for you; I finally saw Anaka for the first time at a free show they played at a bar called Killarney’s on 95th St in Bay Ridge, Brooklyn to promote their latest acoustic EP, Into The Great Unknown – The Acoustic Sessions back in February 2012.  I took my then-girlfriend, Nicole, with me along with my then-bassist, Joe, and his friend Shake (yeah, I know, a dopey nickname.  But he’s awesome).  Now…when you see a band play a bar this tiny the last thing you’re going to expect is for a mosh pit to break out, right?  Well…no sooner did they hit one note did the whole bar break out into a pit.  I was siting right where the band was and I found myself pinned to the bar by my left leg!  I struggled to get out and I think it was Joe who finally pulled me out to safety.  But man, driving home from the show that night my left quad was in exquisite pain and it stayed that way for the next two weeks – that’s more of a souvenir of a good time than the t-shirt I bought from Jimmy that night!

What a fuckin’ week it’s been for Angel Vivaldi!  The youtube sensation only released the video for his new single “._ _ _ _” just a few days ago via Guitar World and it already has over 20,000 views and more than 24,000 views on Ibanez Guitars’ facebook page.  I actually posted a video of him performing this song at Dingbatz a few blog posts ago so this the song proper.  Here’s the video now:

He recently made the ballsy decision to quit his fulltime job to go on tour based on all his success so if and when he comes to your town you should go show your support.  You won’t regret it.

Anyone here read what Kerry King said about Jeff Hanneman yet?  Apparently Kerry was asked if he feels like Jeff’s spirit is guiding the band.  Kerry’s reply? “Jeff is worm food.  When you die, you go in the dirt.  There is no doubt.  Doubt’s called agnostic.  I’m not agnostic.”  Well Kerry is there’s on thing you ARE it’s a real piece of SHIT.  “Worm food”?  It’s one thing to say that you don’t feel like his spirit is guiding the band.  That’s fine.  But calling the guy that wrote Slayer’s greatest music “worm food” is as disrespectful and as slimy as it gets man.  There are a Lot of people I can’t wait to call worm food but if I was in your position and my co-guitarist who contributed so much was gone I wouldn’t say that shit about him.  Scumbag!