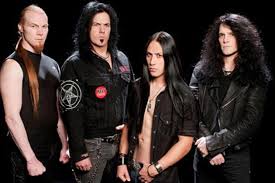 What a week it’s been for Morbid Angel, because in a matter of just a few days, the band lost…everyone.  It all started when founding guitarist Trey Azagtoth announced that bassist/vocalist David Vincent was out of the band and back in the band has non other than Steve Tucker – the very guy who replaced David when he first quit the band back in 1996.  Trey even said they were working on new music together.  Then came the drama; a few hours later David responded saying his basically had no idea what anyone was talking about and that he never the band or was asked to leave.

But wait, this gets better!  With the next two to three days drummer Tim Yeung quit the band, saying he left over financial reasons, which is not too much of a surprise, and then co-guitarist Destructhor (his real name is actually Thor.  That is fucking awesome!) announced that he was out because he wanted to go back home to Norway to focus on his other band Myrkskog.  What I find funny about this already is that both Tim and Destruthor decided to leave Morbid Angel after their most recent European Tour ended in December 2014.  I imagine that they both left because of money and their both too professional to say anything, although according to Destructhor the band wanted to work with someone “more local”.  Already sounds a bit fishy.

Then, just two days ago, David reversed his initial statement and announced that he too was in fact out of Morbid Angel.  He said that he Trey had a long conversation and they both agreed that they had some “incompatibilities” in regard to them working together any longer.  Of all the band departures this is the one that was the lightning rod.  David Vincent is the vocalist you hear on those first four classic albums.  He left the band in 1996 to join his wife’s bondage themed rock band The Genitorturers.  There was some dispute over the creative direction of his last album with them, Domination.  David thought at the time that it was sonically their best album to date due to their upgraded production values and the fact that they tried a few new things.  Trey, on the other hand, said a few years later that he found the sound on Domination to be so sterile that it pissed him off.  He also didn’t like that David wrote all the lyrics this time around and that they strayed very far away from the themes of the previous three albums.

Steve Tucker came in and did three albums with the band and then something happened in 2004.  Trey and David started talking again, which led to him doing a few surprise gigs with the band…which led to him rejoining the band altogether due to the positive reaction from the fans.  There’s been a bit of controversy ever since the band released their 2011 album, Illud Divinum Insanus, an album so techno sounding that David was given the blame for the musical direction.  Hell, look at the guy.  Really – look at him, even in the picture on this post!  God damn if he doesn’t look like something out of a sex shop or Hot Topic before they were bought by the Gap!  Some of you call him David Sixx, which I think is hysterical.  Given that along with his Genitorturers past and his big influence on Domination twenty years ago it’s easy to make a martyr out of David.

So I wonder like everybody else what happened because Trey obviously isn’t ready to talk yet.  He might never be because he doesn’t like to talk…which is probably why he kept David around – he’s very social, I met him so I know as does anyone else who met the guy.  Some people are saying that this is Trey cleaning house and regaining control of his band because David was once again too strong when fighting for creative control.  Some are a little bummed that he’s gone again and some are REALLY happy that he’s gone and Steve’s back in.  And remember I mentioned David not knowing he was gone?  Sounds like Trey didn’t really have the balls to tell him he was gone, kind of like when Warrell Dane of Nevermore discovered through Blabbermouth.net that Jeff Loomis had quit the band.  Pretty scummy if you ask me.

So where does Trey Azagtoth go from here?  Does he hire all naive rookies in order to pay them less than guys like Destructhor and Tim were already getting?  Is Trey ever going to discuss what happened?  Is this new album he’s doing with Steve Tucker going to blow Illud Divinum Insanus out of the water?  Only time will tell but if Trey ever talks he has a lot of explaining to do because a whole band leaving in or announcing their gone in just a matter of days raises a few red flags.  I’ll always be grateful that I got to see Morbid Angel with David Vincent during last year’s Summer Slaughter Tour at Irving Plaza in Manhattan.  Great show and no songs from Illud!  Here’s a short video I made of the band playing “Fall From Grace” off their second album, Blessed Are The Sick.  It’s not even two minutes long though because my phone was dying after a long day out.

One thought on “Morbid Angel: A Death Metal Soap Opera”