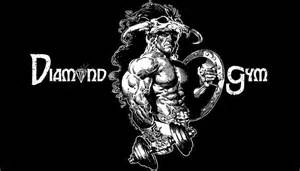 Yeah…I wrote Pilgrimage.  Why?  Because if you are a serious lifter of any kind, powerlifter, bodybuilder, whatever, and you happen to be anywhere in New Jersey, then it is your duty as the serious lifter you claim to be to go to Diamond Gym at least once.  For forty years now Diamond Gym has been one of THE most badass, hardcore gyms in the entire east coast.  When ex-bodybuilder John Kemper opened up the place it became the original “East Coast Mecca” long before Bev Francis opened up her first Gold’s Gym franchise.

I remember the first time I even heard of the place – and Adam from Black Metal Fitness, if you’re reading this, this is for you buddy! – it was on YouTube, where I discovered an old WWF interview with Mean Gene in this really badass looking dungeon gym, speaking with the owner’s wife, Shirley Kemper, about the types of people the gym attracted.  She then mentioned the British Bulldogs and next thing you knew there was the Dynamite Kid spotting Davey Boy Smith as he was benching four plates without a struggle.  Then Dynamite did the same…again, without a struggle.  Here’s the video, took me a while to find it:

It got me curious, real curious.  At the time I considered myself a gym historian of sorts, trying to learn all I could about the gyms of the past, such as R & J Health Studio in Brooklyn, NY, the breeding ground for Lou Ferrigno, and where my dad trained for fifteen years.  I also wanted to know if these gyms were still around and if so would the environment still be the same?  Well, when I found out Diamond Gym was still around I wanted to know more.  John Kemper retired and sold the gym in 2007, he sadly passed in 2012 at just 67 years old.  But apparently the gym’s current owner, Dwayne McDaniel had no problem keeping the gym’s hardcore vibe.  In fact, when you look at the place in videos it looks like nothing was touched.

So I finally made my way over there yesterday.  First off, god damn Maplewood, NJ is ghetto as fuck!  Secondly, it doesn’t even matter because once I entered the gym – which is right next to a gated community – it was all worth it.  Oh sure, a few walls might’ve had a fresh paintjob recently, and there are a hell of a lot more autographed  pictures on the walls of the bodybuilders that came from here.  But literally nothing else has changed, the equipment is exactly what I saw in that British Bulldogs promo from nineteen eighty-fucking-six, the barbell plates are so old that they probably haven’t even been in production in over thirty years, and the floors in the squat rack and leg press area are uneven.

See this?  It’s a Nautilus Multi Machine and there’s only one other gym I know that still has it because I used to train in that gym.  If you want to know more about this once fascinating “contraption” go on YouTube and just type in “Mike Mentzer Boyer Coe”.  Trust me here.

I’ll admit I was a little temped to leave if the idiot I heard through the speaker didn’t stop repeating “Ima keep it HOOD!” over and over again, but all in all the place was perfect!  Here’s my workout:

The shitty rap music in the place was so fucking loud that if I didn’t put a song over it I know I would’ve gotten at least five copyright claims because of the stupid algorithms on YouTube – I refuse to let DMX make money off my video.  Also, forget about conditioning.  I’m convinced that cardio isn’t in Diamond Gym’s vocabulary because I saw not one treadmill.  Now that is badass.  THAT is hardcore.

The gym just wreaks of all things tough as nails and I definitely will be back again.  If it wasn’t so far from me I’d leave my gym and sign up there yesterday.  Someone on yelp referred to it as “alpha and the omega” and he definitely hit the nail on the head there.  So to end this I’ll reiterate what said at the start of this.  If you call yourself a serious lifter and you live in Jersey, you need to go to Diamond Gym.