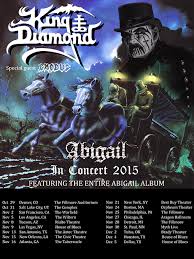 It was an eerie night on that 7th day of July in 1777…alright it was more like last Friday in Manhattan and I was actually going to see King Diamond.  On this tour he’ll play a few classics before playing in its entirety Abigail, the album that made King a metal GOD.  Thanks again Courtenay!  So I went to pick her up at her job and off we went to PlayStation Theater in Times Square, where we were searched twice, including being patted down because of the ISIS attacks on Paris…as well as ISIS claiming Times Square was next.  Oh, and if you live in NYC and really thought they’d do it you’re dumb.  It’s too big and too obvious.  I think they’d hit a much more low key area.

We got there long before the doors even opened and sat because she hurt her calf just walking to meet me and my knees were in exquisite pain from squatting 210 for 6 reps without my compression gear on.  So more than an hour passed before people stared coming in and man, this show got stereotypical real quick.  I saw a lot of Mexicans walking in and you just knew they were there to see Exodus, the opening band.  There’s always been a connection between Mexicans and thrash or even some death metal.  I can’t explain but if you’ve ever gone to a thrash show you know what I’m talking about.  I saw dudes coming in with bandanas on with unbent baseball caps over them and 2nd generation Exodus and Slayer t-shirts.  It never fails…ever.

Sitting a few seats next to us were the stereotypical awkward/not so good looking couples who are bonded by that one little thing…their love for metal.  Awww.  Then someone said something to me that had me looking.  “You notice how many morbidly obese guys are here?”  Oh yeah, it was real bad.  I’m totally convinced that it’s the result of years of devotion to Dungeons and Dragons, staying indoors all day and playing online video games with thirteen year old boys and eating like shit their entire lives.  You know these motherfuckers came out of the woodwork just for this and then ran back home to their video games.  I’m not the best looking guy out there but I’m sure I was maybe one of the most in shape guys in the whole fucking building at that moment.  Ladies and gents – another metal concert stereotype.  Don’t ever be that guy.

So around 8pm Exodus were getting ready to hit the stage.  Their entrance music?  “Piano Man” by Billy Joel.  Once Exodus came on they opened with a track off their new album Blood In Blood Out.  My biggest problem with this band forever will always be Sousa’s vocals.  I said it in my last blog but canning Rob Dukes was THE dumbest thing they could’ve done.  Dukes gave Exodus much needed new life with his intense screams and barks.  I even bought an Exodus album for the first time!  Forget that they way the canned him was pretty scummy it was just a bad artistic call.  The are so fucking heavy that Sousa’s nasal delivery just sounds so fucking dated.

Aside from that they played great.  But why did Gary Holt look so different here?  What a sec…..that’s not Gary!  Where is he??  I texted my friend Maureen, who was waiting in line to get searched, if she knew anything.  I had no idea that he was not going to be there because of Slayer commitments.  It seems crazy at first, Exodus hit a goldmine, opening for King Diamond and having three additional dates added in New York City alone because the initial date sold out so fast.  But then again, Gary’s now in Slayer as well as Exodus and probably making much more money in one show alone.  Good for him.  So who was his replacement on this tour with King?  It’s Heathen guitarist Kragen Lum, who did a damn good job playing Gary’s parts.

After a little waiting period, the curtain opened.  Then…this happened….

I have to admit, I was a bit worried.  Over the last several years he suffered a herniated disc and most recently heart surgery.  I saw a clip of him with members of Mercyful Fate playing with Metallica on their 30th anniversary show in 2011 and he wasn’t that good.  But that was then, because as soon as he wailed out “GRANDMAAAAAAAA!!!!” all my fears were gone.  Holy shit he was amazing.  His band were spot on.  Andy LaRocque’s solos?  Total.  Fucking.  Jizzfest.  He can solo all day and I’ll never get bored.  The stage?  Two staircases with a balcony with two inverted crucifixes and a pentagram behind it.  So eighties, so amazing.

After “Welcome Home” the band kicked right into “Sleepless Nights”, my personal favorite from King.  It’s so different from the rest of his material up to that particular album for me, I guess because of the chord structuring and the emotion that’s actually in that song.  Yeah I know that Conspiracy is a concept album like everything else from Abigail on; but every time he shrieks out that line “Killing The PAAAAIIIINNNN!!!!!” it always hits me and now here I was hearing it live and my response was no different here.  They broke into “Halloween” after that and then two Mercyful Fate tunes, “Evil” and “Melissa”.

I have to admit I’m one of the many people would’ve never known “Evil” or ANYTHING related to Mercyful Fate or King Diamond if I never bought Metallica’s Garage Inc.  So when King shrieked “I was born in a cemetery….” I immediately heard Hetfield singing it in my head.  At the end of “Melissa” King says in a raspy voice “I think Melissa’s still with us…”, before slowly walking up the steps, them limping.  Then, as he reached the top, the pentagram, crucifixes and band logo on the side of the stage descended.  Then shit went DOWN!!!!!

I had to get the first two songs recorded.  “Arrival” is such a dark and ominous song, foreshadowing the rest of this creepy ass story about a pregnant woman whose baby is possessed by the spirit of Abigail, the illegitimate, stillborn child who was mummified by Count La’Fey.  Hearing every single track was intense.  The band were spot on.  King’s voice was much better than I would’ve ever expected.  I should also note that while most aging bands will tune lower so the singer can handle the songs, King played EVERYTHING in their proper tunings.  Not bad for a guy who’s sixty years old.  And there’s one more thing I need to point out.  My girlfriend pointed out King’s makeup, which looked NOTHING like his usual look, inverted crucifixes all over his face.  This time it actually looked a lot more like his classic look from the 80’s, you know, the one Gene Simmons tried to sue him over in the late nineties like an asshole.  Hey Gene, fuck you!

As the show came to an end with “The Black Horsemen” King yelled out to the crowd “Thank you so, so much New York!”, and rightfully so.  Only in New York City could one show turn into four and it was easy to tell he was moved by it all.  He’s lucky to be alive and I’m sure he knows it.  After the band finished up “Insanity” from King’s album The Eye, could be heard through the PA speakers.  It served to me as one last reminder of how talented a songwriter King really is.  He’s extremely underrated and deserves much more credit than he gets, even after Metallica exposed him to the world seventeen years ago.  I’m pretty sure King stayed on stage for five extra minutes even after the rest of the band walked off just to high five the fans, soaking it all in.  This type of thing doesn’t happen to him in the states often and I know it had to have felt amazing at that moment.  He’d go on to play two more shows in the next two nights and I’m sure the results were the same.