I gave myself a few higher expectation this time.  Yeah, it was only my second meet, but after a year of practically training for power and nothing else I decided the time had come for me to at least somewhat challenge myself.  Hell, in the year since my last meet my Squat had finally hit the 300’s and my Deadlift was just 15lbs away from hitting 400.  My Bench Press?  I really don’t want to even go there.  But I knew going into this meet that my shoulders were absolutely fucked, a result of carrying around a leather shoulder bag by the handle because the strap was broken and having a bunch of weight pulling on my joints.  To make matters just a bit worse, I was at a park with my students the day before this meet and one of them asked me to play catch with him.  Of course I couldn’t just tell him no.  The problem?  Throwing a football requires a tad more force – or power! – than a regular ball, especially if you want to throw a spiral.  So yeah, my throwing arm was now even more fucked.  Just great.  This fuckin’ kid is so lucky I like him.

So I arrived at the Ramada Plaza Hotel just a tad more focused…and even more anxious than last time!  See, I had planned my opening lifts maybe just a week in advance, not because I was procrastinating, but because I wanted to feel comfortable knowing I was going to least pull those off – especially with the squat.  If there’s one very important psychological tool I learned from Jim Wendler, it’s that you want to be able to just bang out your Squat opener.  If you do that you’re confidence will sky rocket, if not, your confidence as a whole might just do a nice, big nose dive.

I weighed in at 179.8lbs, which was fine since this was my first meet in the 181lb weight class along with the Raw Modern division (knee sleeves or wraps), managing to hit 180lbs not even a handful of times in the last few months alone.  Since we were as early as we were I had plenty of time to take since pictures, but not many because almost as soon as I walked into the ballroom I almost immediately ran into PJ Santa Teresa, who was competing in the 198lbs weight class and the Raw Classic division.  He also won first place last year.  I ran into Eric Chase a few minutes later and the three of us just got lost in all things Powerlifting for while, with me even educating PJ on the Doug Young won the 1977 IPF World Championships with three broken ribs.  In fact he might be the topic of my next post!  So anyway, because I got stuck talking to PJ and Eric for a while I found myself not taking too many pictures.  But I sure noticed some sick new trophies! 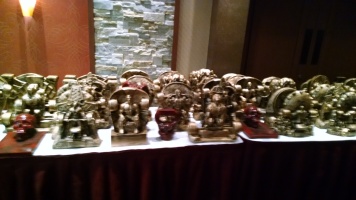 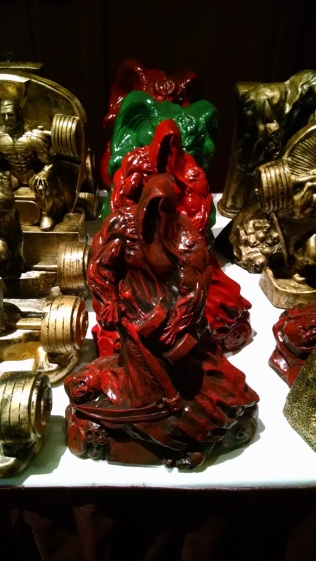 This shit right here is exactly why I’d kill to win just one trophy from this fed.  So fucking metal.  Seriously.

So I made sure that this time around all my lifts were filmed and you can see them all right here!

But for the actual story, I already knew in advance that I’d be going for a 330lb squat PR for my final lift so long as my first two attempts were successful, which they were.  Once again, C4 was my buddy because was nice and warmed up, and real fuckin’ jumpy.  So after hitting my first two attempts of 280lbs and 305lbs I’m starring at the monolift with full concentration.  Trying to channel Doug Young; what you can’t hear in the video above is that I’m so into shit now that I’m growling as if I was Doug himself…only his growl was WAY more terrifying!  You know what…I think I AM going to write about Doug next.  Anyway, I’m feeling stuck at the half way point, all it took was me screaming “UUUUPPP!!!” at the top of my lungs and I had all three green lights.  Quick fun fact:  Both of my second squat attempts from this year’s Rumble and last year’s only had two green lights.

My Bench Press attempts were where it all started to go to shit, making me feel like all my energy must’ve gone into squatting.  As I said earlier…my shoulders were in shit shape, so my opener and second attempt, both green lighted, were a measly 150 and 160.  After the second attempt I was in so much pain that I lower my third attempt from 180 to 170, fearing an injury over just not getting the lift.  Here’s where I think I should’ve used a wider grip width because my grip alone was not an issue, having finally fixed that issue not too long ago.  But either way, as soon as the bar hit my chest it wasn’t going back up.

I had a lot of time to kill before Deadlifts so I spent it eating salty snacks and drinking gatorade, taking in as much sodium as I could, since sodium retains water as well as helps to restore electrolytes.  I also took my other bottle of C4, ensuring I’d have the energy I’d need if I though I was going to pull 420lbs.  I made sure I was focused, even if the preworkout alone wasn’t hitting me like it did for squats.  So I opened with 355 and my second attempt was 385.  After I hit that number I somehow felt confident enough to request 420 as my final lift.  This would’ve brought my total into the low 900’s.  After about ten minutes my flight (or group) was called up for our final attempts.  Eric told me he was just going for 400lbs, which appalled me a bit because I know he had more in him…although I now wish I did the same.  Eric hit his number beautifully, and I was a few lifters behind.

It’s now my turn, standing behind the bar, ammonia cap under my nose for extra stimulation, mid chest length hair down like I’m Dan Green or some shit.  I’m nervous and excited at the same time as I take a deep breath and manage to just rip the fuckin’ bar right off the ground.  But at the halfway point I got stuck and couldn’t lock out.  At all.  It was so bad I even dropped the bar, which you’re not supposed to do.  I’m now FURIOUS.  Slamming down my Inzer Forever Belt, all I wanted to do was throw shit everywhere.  After taking two minutes to kind of calm down I asked my girlfriend to show me the video.  And there it was – my hips went up way too early.  I was fucked from the beginning!  Was I that nervous that I wasn’t focusing on my body movements?  Most likely.  So now my total was going to be 875.

After my flight PJ went on to deadlift 550lbs for his second attempt and it was fucking FLAWLESS.

That look on his face at the end gets me every time.  He tried to go for 600lbs after this; he was just about to lock out when he BLACKED out instead, falling face first in front of the judge’s feet.  Rising blood pressure is a bitch.  He still managed to win 3rd place, by the way.

I plan on going back to the gym next Sunday and I’m going to start using Jim Wendler’s 5/3/1 Boring But Big template, which is essential a Powerbuilding program.  I think it’s time for me to focus more on muscle mass for a bit, especially in regards to my chest and shoulders.  I’m also considering trying the Sumo Deadlift stance to reduce my range of motion and take some stress off my lower back and put it on my quads.