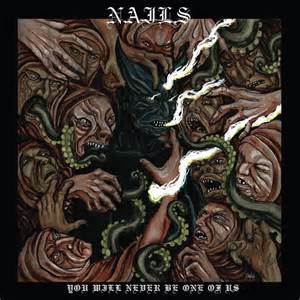 C’mon…if you’ve been reading my blog for the past several months then my first ever pick for Album Of The Year should’ve been PAINFULLY obvious.  I was a fan of Nails for months before it was even released, but it was upon the June 17th 2016 release of their grindcore masterpiece, You Will Never Be One Of Us, that they – especially guitarist/vocalist Todd Jones – became absolute GODS.  And if you’ve never heard anything off this beautiful shitstorm of an album here’s a quick taste.  No really, it’s only a minute and a half long!

So, for those of you new to this blog, why did I pick You Will Never Be One Of Us?  Surely, I could’ve picked any number of albums; Crowbar and Meshuggah – two of the heaviest bands on the fucking planet – both released two really badass albums.  Gatecreeper released a new album around the same time and one of my YouTube subscribers just declared the new Blood Incantation album is his own pick of the year.

There’s reason number one right there.  Not sure how many grindcore bands make it to the cover of a magazine like Terrorizer.  We can also discuss the fact that You Will Never Be One Of Us was somehow able to reach #129 on the Billboard Charts among it’s release.  I don’t know about you but I personally don’t know of any of grindcore or powerviolence style bands that can hit that kind of a milestone.  Fuck, before they went on hiatus without warning over the summer their tour schedule was to be significantly bigger than it had ever been, including a spot on the Ozzfest 20th anniversary card.  That’s HUGE for a band like Nails!  They’re about to make a comeback in just a few days at The Power Of The Riff Festival, they just released a 12″ split with Full Of Hell eight days ago and now have more dates planned for next year with Gatecreeper, including stops in Philly and at Williamsburg Music Hall in Brooklyn, NY.  Needless to say 2016 was Nails’ year.

It’s easy to assume that You Will Never Be One Of Us is on ANY album of the year list due to hype…but why was there so much hype?  Easy.  Because throughout the record you can feel Todd Jones’ anger, his hatred against those trying to make a living off something his kind have worked so hard to put together only to be working a full time job (although he seems to prefer that), against society…against the fucking world.  His vocal delivery alone here was a major change from 2013’s Abandon All Life.  Gone was the high pitched scream and in it’s place Todd found his true voice, one of slobbering anger, growling and screaming like a lunatic in a straitjacket, wanting to get out and just murder you.  There’s no way you can listen to it and tell me that it isn’t genuine either.  And that’s why this is my first album of the year pick…it’s real.