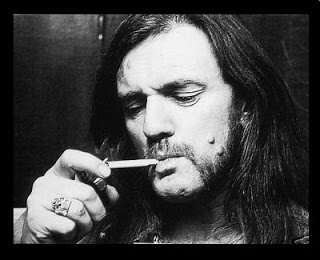 Well…unless you were under a rock or in a coma over the last few days you already know that the most unimaginable actually happened.  God himself died this past Monday.  What a shitty way to end the year, losing the legendary Lemmy Kilmister, the Metal world’s King Badass, as the year is coming to a close as well just four days after the son of a bitch celebrated his 70th birthday.

My girlfriend read the news while I was playing my guitar that night.  She came over to me and told me to take a deep breath, that’s when she told me the news.  I initially outright refused to believe it, like I’m sure everyone else did.  Lemmy Kilmister?  Dead?  Yet Keith Richards still lives?!?!  As Mike Portnoy said on his twitter account, this was without a doubt the moment everyone feared would come yet never thought would actually happen.

For those of you who really were under a rock or in a coma; Lemmy thinned out at an alarming rate in the course of the last year, maybe even more than that, clearly a result of his lifestyle.  The guy only did speed for decades and he even told Rolling Stone in April 2014 that he still was doing it – he just lowered the dosage after being fitted with a pacemaker.  He also decided to switch out the Jack Daniels for Vodka because “vodka has less sugar”.  Oh Lemmy, you funny guy.  But you still had to respect the motherfucker because even with his declining health he still kept a grueling tour schedule with Motorhead.  No one else would do that now.

That alone leads me to speculate about his “sudden” cancer diagnosis.  According to the press he was diagnosed with aggressive brain and neck cancer just two days after his birthday and was given “two to six months” to live…only to die two days later in front of his favorite video game which the guys at The Rainbow were generous enough to transport to his condo that night.  I don’t buy it.  I think he knew “two to six months” ago that he was fucked and decided to pull a page out of Freddie Mercury’s book and keep the truth under wraps for as long as was feasible, but not for the same reasons Freddie did.  Freddie was to be the Rock world’s first ever AIDS casualty – that clearly had to be pretty scary to admit back in the late 1980’s.

So why would Lemmy choose to keep this under wraps if my theory is right?  Simple (while still stupid!)…he didn’t want us to worry about him.  Lemmy was a warrior, his home was the stage and he couldn’t be Lemmy fucking Kilmister and NOT go out with a fucking bang!  He was a man of no regrets and he knew his lifestyle had finally caught up with him; he must’ve known “two to six months” ago that there was no way chemo was going to help in anyway so he probably just said fuck it and finished what he started.  You can’t do that from a hospital bed with your hair falling out, right?

That’s why we will always remember Lemmy.  He ALWAYS delivered for the fans no matter how fucked up he was.  He ALWAYS delivered for the fans when he “peers” didn’t want to be bothered hanging out with fans after a show or on the street somewhere.  Honestly…I don’t think he really had any peers.  I was going to write about this in a future post but I got the honor of meeting Lemmy almost eleven years ago when my friend’s band Arctic Flame opened up for Motorhead and he invited me to go with him.  What did that mean to me?  Well…I got to see the band do their soundcheck….holy shit they were LOUD.  The fucking PA monitors were tied together and the floor was shaking!  I was deafened instantly and the actual show wasn’t to start for another two hours.  It was beautiful.  When they finished their acoustic encore of “Whorehouse Blues” I cheered them enthusiastically along with this 15 year old kid who was with us.  Lemmy thanked us and when I yelled out “Lemmy you’re a fuckin’ GOD!!” his reply had me dying.  “No no no – God’s a lot taller!”.

Lemmy was a pioneer.  His bass tone is undeniable and will most likely NEVER be duplicated.  Thanks to him Motorhead was most likely the first ever crossover band bridging the gap between Punk and Metal, they were fast and they were so loud.  Even the punks wore Motorhead t shirts and had patches on their vests. If it wasn’t for Lemmy no thrash metal band would EVER exist.  This especially goes for Metallica, a band you won’t always see me refer to here.  But if there’s one thing I’ll always be grateful to Metallica for it’s introducing us all to Motorhead.  If I never bought their covers album Garage, Inc., I would’ve never heard “Overkill”, “Damage Case” or “Stone Dead Forever”.  If you were a kid in the 90’s like I was you probably didn’t know who the fuck Motorhead were until you bought that CD – and don’t you lie and say otherwise.  Lemmy also wrote amazing songs with other people outside of Motorhead.  Remember “Mama I’m Coming Home” by Ozzy?  Ozzy just wrote the title, Lemmy wrote all those beautiful lyrics.  Just too bad Ozzy and especially $haron decided to shit all over him and just give him a flat rate instead of just royalties.

But more important than any of that….Lemmy NEVER did what other people wanted him to do.  He was a trailblazer and when you’re trailblazer you listen to no one.  He lived his life on his own terms.  No one could drink like him or handle the effects of speed like he could.  Even more important than that, no one before or after him kicked ass like he could.  Scott Ian said that his death leaves a huge hole that will “never be filled” and he’s absolutely right.  It’s also a bit of a financial loss for the Rainbow.  Oops.