Like most of you reading this, I’m sure, it was a real shock when it was announced that DC Comics would be releasing a film adaptation of the classic 1989 Elseworlds one-off Batman: Gotham By Gaslight.  Elseworlds, for those of you who are unaware, is DC’s imprint created strictly for stories of their characters than have nothing to do with their normal continuity.  While Gotham By Gaslight was not the first time any DC character had been taken out of it’s continuity, it just happened to be the first of it’s kind to be released under the Elseworlds umbrella. 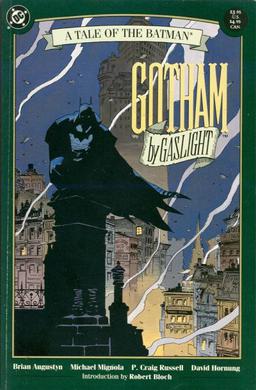 The original story itself places Batman in the late 1880’s, in the era of Jack The Ripper.  Long story short, Bruce Wayne’s parents were murdered (well fucking duh!), and after years away from Gotham City and studying under Freud, he becomes Batman after it’s determined following a series of murders against multiple women that Jack The Ripper had come to Gotham City.  At the same time, Bruce reunited with Jacob Packer, an old family friend who was trained in medicine and also became a lawyer using the financial backing of Bruce’s father.  Bruce is framed for the murders and, despite having Packer as his attorney, is still found guilty and is sentenced to hang.

While imprisoned in Arkham Asylum, Inspector James Gordon gives Bruce documents to read in order to help him prove his innocence and with just a day to go before he’s to be hanged he discovers the Jack The Ripper was right under his nose the entire time, as Jack clearly had the skill of a surgeon and had a knife used by his father.  It was Jacob Packer.  With Alfred’s help he escapes Arkham and confront Packer as he’s about to kill another woman.  The fight ends in the site of the Wayne gravestones.  Here Packer admits that he hired an assassin to kill his parents all because he wanted to bone Martha and she rejected him.  Yet even after he had her killed he couldn’t get the sound of her laugh out of his head, so like a true pussy he decided to kill any woman who reminded him of her.  The police arrive but before they could arrest Packer he beautifully slashes Batman across his chest before the police open fire on him.

There’s a bit of ground to cover here’s so I’m going to try and make this as easy as possible.

One major aspect of the original story which blew not just my mind, but probably everyone else’s as well, was the artwork.  According to an interview segment in the bonus section of the DVD, DC might’ve had to shell out for cash than usual just to have the story printed because it involved the use of so many dark colors.  The story featured many dark shades of blue, as well as beautifully intricate detail in regards to the characters and of Gotham City.  I guarantee that recreating that look and feel for a DVD might’ve seemed just a little too ambitious but the guys making this managed to pull it off.  When I look at the way Batman alone was drawn I immediately was taken back to the moment I first read the original story.

If you’re one of those who hated the animated take on The Killing Joke then you’re totally going to hate this too.  Much like that movie, extra scenes needed to be added in order for the move to last over an hour.  But instead of just creating something new like what was done in 2016, DC were able to draw influence from a story I had no idea even existed.  In 1991, DC released the Elseworlds title Batman: Master Of The Future.  Taking place in 1892, it’s the sequel to Gotham By Gaslight, in which a fair is held to celebrate the new inventions that’d help bring Gotham into the 20th Century, as well as a new villain that wants to prevent any of it from happening.

So in order to fill out space, many scenes in this movie take place on the Gotham fairgrounds, which certainly allowed Bruce Timm and co. to go wild with some Steampunk stylings if you’re into that kind of thing, especially when Batman is seen riding what looks like a miniature train (a Victorian era take on the Bat Cycle, I guess).  I’m not and I actually think Steampunk is gay as fuck.  But hey that’s just me.  The bad news here is that thanks to this change it appears that the film adaption has almost nothing to do with the original story, which actually does bother me.  But that’s what leads to the most ridiculous part.

Ok What The Fuck??

Don’t read this if you haven’t watched the movie yet and don’t want spoilers.  As mentioned earlier, there are several change made just for this DVD, the one moment remaining the same being that Bruce Wayne was framed for the murders that Jack The Ripper actually committed.  Upon Bruce’s escape from Blackgate Prison he arrives as Batman at Inspector Gordon’s house.  In trying to find him he finds a white trail stopping at the wall.  Batman manages to find a secret room behind it with newspaper clippings of Jack The Ripper, as well as multiple surgical knives and pictures from his days in the military.  So let me get this straight…so in order to fuck with us all…Bruce Timm decided to make….Jim Gordon the movie’s Jack The Ripper?  Why?  Was it because he’s otherwise known for being the symbol of anticorruption not named Batman?  Who fucking knows?  I still don’t get it.

Let’s make it clear now.  I don’t hate what DC did with this version.  The artwork alone is just magnificent.  Words truly can’t describe how much that alone impressed me.  It was interesting to see bits and pieces of another story I was completely unaware of.  That turned the movie into a bit of a Batman history lesson for me.  The one thing that bothers me the most is the removal of Jacob Packer as Jack The Ripper and having James fucking Gordon taking his place.  And for what?  To have as his motive that he hates women and wanted to “clean the streets”?  I think Jacob Packer’s mental instability would’ve been much better for this.  So if I had to give this a rating of 1 – 5, I’d give Batman: Gotham By Gaslight three and a half middle fingers.