There were lot of brutal albums that came out this year, from just about all forms of Extreme Metal.  I knew by June that it’d be difficult to chose just one.  It was so bad that I even put out an Instagram poll – in which just one person voted…which is why this year’s Album Of The Year…is actually a tie.  One of these two is a record I had already reviewed over the summer, and the other one is a record that took me by surprise, not because I didn’t expect this one in particular to be any good – oh I did! – but the increase in songwriting quality and atmosphere absolutely blew me the fuck away.  So let’s get started: 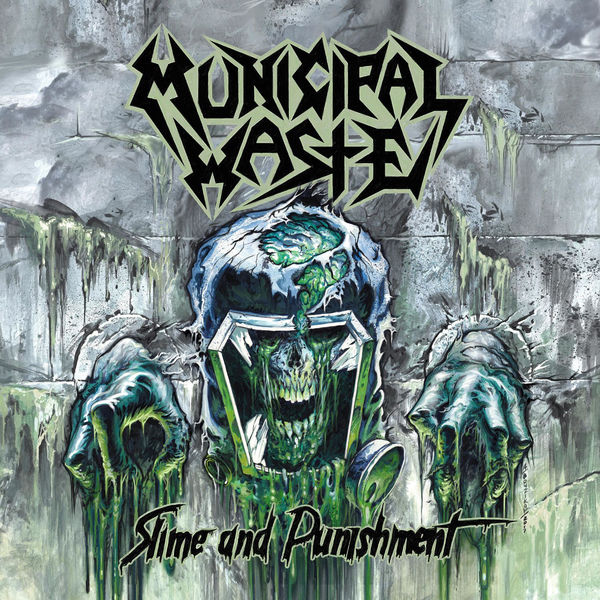 I reviewed this record back in August, by which point it had been out for a few months.  Here’s the link:

But in short, Municipal Waste are BACK.  Five years away plus the addition of additional guitarist Nick Poulos to beef up their sound, did the band way more good that I ever expected.  The album sounds fresh compared their previous albums, 2009’s Massive Aggressive and especially 2012’s The Fatal Feast, a seeming desperate attempt by the band to be more of a Crossover act.

The songs are all perfectly quick and to the point, with the longest one clocking in at just over three minutes.  The guitars are way beefier, and singer Tony Foresta found the perfect vocal approach, using the same high pitched scream he’s used for the last few Iron Reagan albums.  Bottom like:  With Slime And Punishment, Municipal Waste found a formula that absolutely works for them, one that’s focused yet reckless at the same time.  Let’s just hope they keep this for a bit, eh?

The other album that blew me away.  I was dead set on making the Municipal Waste record my album of the year until this past October.  The Black Dahlia Murder went through a possibly band shattering change two years ago when lead guitar Ryan Knight left the band just a month after the release of Abysmal and after four albums with the band.  As far as I’m concerned, Ryan’s playing is what turned The Black Dahlia Murder into a full fledged Death Metal band.  In his place they hired Brandon Ellis of Arsis, marking the second time the band has poached anyone from Arsis – which is fine because Arsis are absolutely fucking BORING.  I never thought technical guitars with a black metal vocal could get so stale so fucking fast!

When I heard the band were releasing a new album I expected it to be good, until I heard this:

Oh fuck!  I knew the band were Carcass disciples but I’ve never heard Trevor Strnad sound so much like Jeff Walker until this moment.  Same with the music, it honestly sounds like the band’s best interpretation of Carcass during their early 90’s peak.  A lot of the credit here goes to guitarist Brian Esbach, the only other remaining original member of the band, for seemingly NEVER forgetting where he came from and NEVER straying away from what has essentially become his signature songwriting style.  You can hear any song from the band and know instantly who you’re listening too.

As mentioned earlier, BDM are essentially disciples of the old school and Nightbringers, at times, is without question equal parts Carcass and even Domination-era Morbid Angel – and if you’ve read this blog in the past you know I love that album!  Tracks such as “Matriarch”, “Widowmaker”, “Of God And Serpent, Of Spectre And Snake”, “Catacomb Hecatomb”, “As Good As Dead”, are absolute balls to the wall musical masterpieces that, while calling on the band’s obvious musical influences, enhance the band’s own signature style, one that seems to easily convey every single negative emotion I could think of.  I own every single BDM album going back to Unhallowed and that album was THE last time the band made me feel every negative emotion I knew of.  That was fourteen years ago, by the way.

I love reading the lyrics sheets to these albums.  Trevor Strnad’s lyrics at times are either straight out sadistic and very Poe-ish.  Take for example these lines from “Kings Of The Nightworld”: Enshrouded in ebony mystery/Blacker than the darkest pitch/A bond of blood to death an drek/Seeking to defile everything which bears his name we will/Destroy you all the same sucking each vein we shall corrupt and dismantle/waging a war without end until/The head of the one fettered Christ doth sate/Our lust for revenge…”.  Trevor never seems to run out of inspiration from the dark side.

So why was this a tie along with ‘Waste for Album Of The Year?  Consistency.  They never strayed to far from what works; they also have a unique signature sound that can reach out to more people than most modern Death Metal bands today.  It’s the reason why Nightbringers was the biggest pre-ordered album in the history of Metal Blade Records.  It’s the reason it’s a tie for my Album Of The Year.

Key Tracks: Of God And Serpant, Of Spectre And Snake; Matriarch; Jars; Kings Of The Nightworld; As Good As Dead; The Lonely Deceased

Speaking of Morbid Angel!  I want to make it clear right now – if this came out earlier than it did it would’ve easily knocked off both ‘Waste and Black Dahlia for Album Of The Year without me hesitating.  But I couldn’t write this post without mentioning Kingdoms Disdained.  This is literally THE record no one saw coming regardless of how excited people were to hear Steve Tucker rejoined the band nearly three years ago.

I actually wrote an article on the situation at the time, debating whether David Vincent or Trey Azagthoth himself were to blame for that last pile of shit Morbid Angel released an it could’ve gone either way.  Yeah, David is now a completely different person, but apparently Try is actually into techno.  But with David’s departure, as well as the release of this track, it’s easy to see who wasn’t to blame after all:

Oh yeah.  This right out the gate reminded me of something off Covenant…but with Steve on vocals instead of David.  It’s absolutely brutal from beginning to end, chock full of polyrhythms, time signature changes, and the single most angry performance I’ve ever heard from Steve Tucker as a vocalist.  Sounds to me like he felt the need to make a statement after being gone for twelve years!

Another great addition to the band is new drummer Scott Fuller.  On tracks such as “For No Master”, “Paradigms Warped”, and “Architect And Iconoclast”, Scott shows that not only can he channel the legendary Pete Sandoval’s double bass expertise, but he also has his own feel and style.  That’s important because…there’s only ONE Pete Sandoval.  Back behind the controls for this one as former Morbid Angel and current Hate Eternal guitarist Erik Rutan.  I wonder if he was intentionally trying to give Morbid as much of a bare bones sound as possible because this doesn’t sound like any of the other bands he’s produced over the years.

What I’m thrilled about most, as I’m sure most fans are, is hearing Trey rip it up in a way we haven’t heard in a long ass time.  His solos remind me of the late Jeff Hanneman’s at times, always have.  Oh yeah, there’s structure.  But in that structure is so much dissonance and chaos, yet it all fits perfectly every single time.  Not many guitarists can pull that one off.  As one of my Instagram followers put it recently “thank fuck they are back!”.  And more so than even ‘Waste, lets hope they keep this up!

Key tracks: Piles Of Little Arms, For No Master, Architect And Iconoclast, From The Hand Of Kings