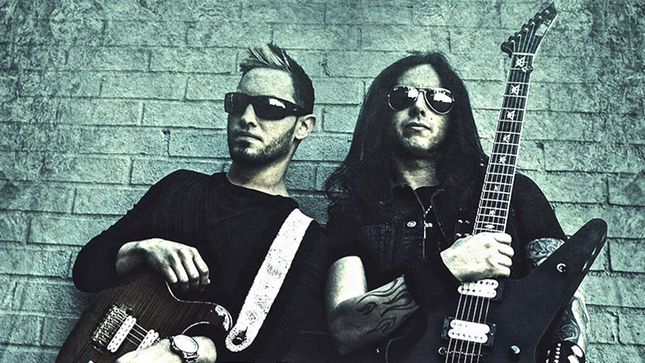 Funny isn’t it?  Just one night after I published a scathing piece on why I basically would like to see New York City burn to the ground…I’m back in New York City.  But at least it was for something awesome; I was there to see Angel Vivaldi and Firewind/Ozzy Osbourne guitarist Gus G on their Operation Domination Tour at The Studio At Webster Hall.  Angel is on the heels of re-releasing his 2010, EP The Speed Of Dark, with it’s tracks being completely re-recorded with his current band, and Gus recently released his latest solo album, I Am The Fire, a more straight forward album compared to what he does with Firewind.  Also, I guess he needs to keep himself busy until Ozzy comes calling to do his next excuse of an album.  Hey, just maybe Ozzy will actually let Gus write material for it this time.  That’s a maybe.  If you follow me on facebook then you already know how I feel about Ozzy’s plans to record after Black Sabbath’s last show.  But if you don’t…I’d rather Ozzy just call it a day, he hasn’t made anything meaningful in decades and the ONLY reason I even bought Black Rain in 2007 was because Zakk Wylde wrote eight of the album’s ten tracks.  So Ozzy…if you ever see this…you were great when I saw you with Sabbath at the Garden.  Do yourself a big favor and just go on a high note like Tony Iommi is doing.

Webster Hall is right around the corner from the 111 year old art store that’s being forced to close so the Marriot can make it into a hotel aimed at millennials.  So yeah I did go check it out before I went inside.  Someone was talking to the owner, who clearly looked distressed.  Then again his family ran the place for three generations.

There are two rooms in Webster Hall: The Marlin Room, which is the main room for popular acts, stupid raves and 80’s prom bullshit and, once upon a time, WWF Shotgun Saturday Night.  Let’s see who remembers that one!  And then there’s The Studio, which is essentially a small bar with a good size stage.  Gus and Angel were to play The Studio…I guess the guys running Webster Hall decided that some shitty rave was more important that a fucking YouTube sensation and Ozzy’s guitarist, right?

Angel went on stage and just blew everybody the fuck away.

I actually met Alex when he was opening up for Crowbar with Battlecross last year at Saint Vitus In Brooklyn.  Really cool kid…incredible drummer.  On this tour he’s actually doing double duty, playing with both Angel and Gus.  Here’s a picture I took of us outside Saint Vitus last year.

I wanted to talk to him and praise the hell out of him but before the show ended I found myself bailing out early because my knees were in excruciating pain – having flat feet is a real bitch.

An Angel’s Poem On A Grave

Gus G?  Loud as fuck!  So loud that a few songs into his set I had no choice but to go to the back, where my girlfriend was…because she already knew better.  Oh yeah, the guy’s an incredible player, real easy to see why he got the gig with Ozzy.  His whole band – which included Alex and Jake, Angel’s bassist, sounded fan-fucking-tastic.  But I had one complaint:

Dude…you don’t have to play “Crazy Train” just because you’re in Ozzy’s band bro.  Hell, most people there for you were actually Firewind fans.

In fact the band did play two Firewind songs d I have to say I was kind of impressed.  I hate Power Metal with a passion but Gus’s playing was so muscular – very similar to Zakk – that it gave the songs some BALLS.

As I said before…I left after the “Crazy Train” cover because my knee were in pain.  But I know for a fact that I missed Angel join Gus on stage for what was probably a really sick jam out.

I Am The Fire

Fire And The Fury (Firewind)

Follow me on facebook to never miss an update.  Go there now and you’ll see more pictures from the show that I may have not uploaded on to this post.