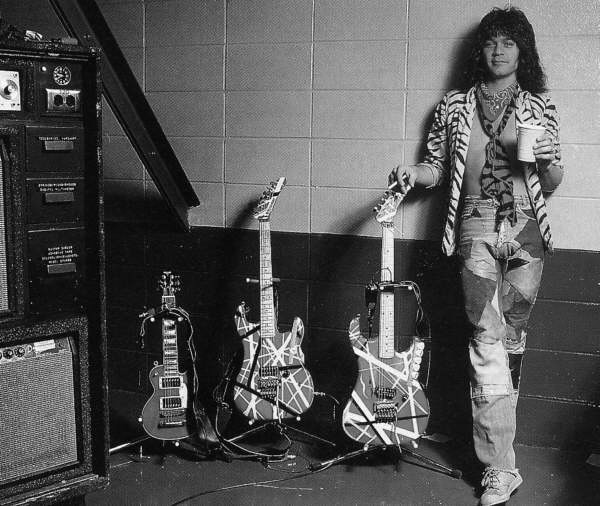 I don’t know what to say that hasn’t already been said about Eddie Van Halen since the word got out that we lost him just a little over two months ago. I refuse to discuss his popularizing the two handed tapping technique that everyone and their mother learns eventually. I won’t discuss his invention of the super strat via his Frankenstein guitar, or his “brown” sound. So what can I discuss that most people probably won’t discuss?

Let’s talk about Ed’s creativity as a songwriter. Why? Listen to his riffs alone on those first six records. He’s not just banging out power chords like most guitarists do. He never relied on a co-guitarist. In fact he was never formally trained on his instrument. Yet he was still an even better songwriter than he was a guitarist.

Ed said in the past that if he ever took lessons he didn’t think he’d be able to play like he did. I can relate to that. I did take lessons for four years. But both of my teachers, the first teacher being the uncomfortably talented Ron Thal and the next teacher being Christian Corrao, one of the most incredible jazz guitarists I’ve ever heard, taught me both directly and indirectly to think outside the box. Nothing has to be played the way you’re told to play it. Just play what you hear in your head and how you feel and you’ll be surprised with what comes out. I attribute that to why some of my future bandmates either couldn’t understand what I was playing or they just didn’t have the mental capacity to try and learn what I was doing.

There’s no doubt that Ed wasn’t the music world’s first ever self taught guitarist. But as with every other aspect of his career, there was something different about the way he played. Thanks largely to his musical upbringing and his later experiences in cover bands, there’s no question that there was plenty of music in his head. But how the fuck do you convey such concepts when you’re self taught?

That’s why he used all six strings on the guitar, as opposed to just hitting three note power chords, as mentioned before. He needed a way to sound as big as he could without relying on a second guitarist. That’s why he wasn’t afraid to use alternate tunings. He was inventive enough that he even incorporated his popularized tapping technique into his songs. I’m not just referring to his solos, I’m referring to the way he’d TAP OUT the fucking harmonics of chords, which took an already pretty chord pattern and made it breath taking. Speaking of tapping for effect, according to Ed himself, the harmonic tapping section of “Dance The Night Away” was designed to emulate a horn section in a pop song, the inspiration being his days playing Top 40 covers.

Fair Warning, my undisputed favorite of the first six Van Halen records, is considered their darkest album. Ed himself had stated that some of his angriest playing is on that record – which is probably why I love it! Tracks like “Unchained” and especially “Mean Street” are probably the most Metal sounding songs the band ever records. Then there were tracks such as “Push Comes To Shove”. The track itself wasn’t angry, but Ed’s solo certainly was. Close your eyes and you could actually FEEL the emotion.

There can be a lot of benefits of being self taught depending on the musician in question. Some people are geniuses and others should just cave in and take lessons. Or give up. For Ed, it allowed for a creativity not seen in Rock guitarists before. Why? Because he didn’t uphold to any written barriers. He didn’t follow structures that were repeated over and over again. He made his own. “Hot For Teacher” is the best example of this. The whole band changes time signatures midway through Ed’s solo for 4/4 to 5/4 and then back again. Not only was it an ingenius way for Ed to have the song fit his solo as opposed to having the solo fit the song, but that little nuance alone displayed his incredible sense of dynamics.

There was no way I wasn’t going have you watch the video!

This to me is the true legacy of Eddie Van Halen. His legacy to me is more than just “Eruption”, or a homemade freakshow guitar and bastardized backline or the showmanship of David Lee Roth. His legacy is that he didn’t follow musical constructs. He bent them to his will and made them his own. He’s probably one of the most copied guitarist ever to the point that I don’t blame him for turning his back to the crowd while he was soloing during the band’s early days. He didn’t want anyone to copy his technique – imagine that!

There was no one like Eddie Van Halen before he came along and there will never be anyone like him again. Let’s not misunderstand, there are so amazing guitarists out there right now, but they’ll NEVER have the appeal that Ed or his band had to the public at large. Primarily in that unlike Ed, none of his worshippers ever got girls because they were too busy jerking off to guitar lessons.

Let the article and Ed’s songwriting be a lesson to all you bedroom guitarists out there. I’m glad you know every mode and scale there is to know. But if any of you ever want to be remembered for anything, learn how to write a song.

Rest In Peace To The Undisputed KING Of Guitar