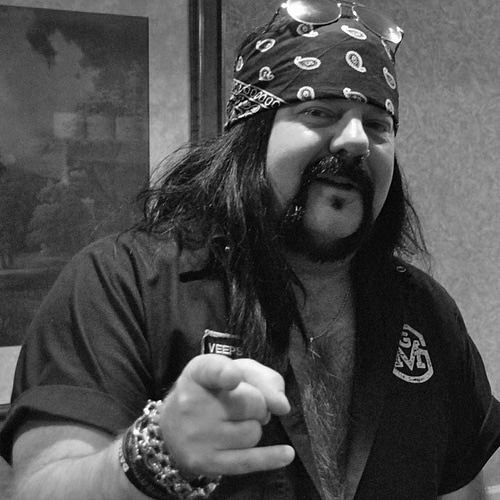 It was early this past Saturday morning, around 2am, when I got up to take a quick piss.  I looked on my phone for shits and giggles and saw that I friend of mine posted something, captioning “holy shit!” above it.  It was a the Billboard article announcing that former Pantera/Hell Yeah drummer Vinnie Paul was dead at 54.  I thought I was just tired; but after a few minutes I realized that this was in fact reality.  There were no facts at the times, all that mattered was that one of the greatest of all time was gone.

The facts, since then, have slowly started to become known.  We now know that he died in his sleep in his Las Vegas home (booze and strippers, duh!), and of a heart attack.  According to the Las Vegas police, there were no signs of foul play.  Then today came the news that, just like his late brother, he’ll be buried beside him and their mother…in a KISS coffin.  Of course it’ll take some time for the toxicology report to come out.  I don’t want this to focus too much on his well publicized lifestyle here.  But let’s face it: despite his machine like intensity on the drums, he never seemed to burn too many calories.  That’s most likely because he never slowed down the drinking.  I mean fuck me did this guy and his brother, the late Dimebag Darrell, know how to party or what??

As I said before, I’m not here to discuss what everyone else is bound to write about.  I’m going to talk about why this son of a bitch from Arlington, TX will forever have a spot as one of the greatest drummers of all time.

So what the fuck makes a musician one of the best?  That person is able to make himself recognizable in songwriting style, technique, skill and sound.  That guy has to be able to make himself stand out.  From non metal guys like Stewart Copeland and Phil Collins (yeah, Phil Collins was a drum god at one point!) to hard rock drummers such as John Bonham to Vinnie’s own idol, Alex Van Halen, each of the guys I mentioned had the ability to make themselves easily distinguishable because they possessed all the qualities I just mentioned.  Vinnie, along with his brother, clearly knew this early on.  And while it would take three independently recorded albums before they were signed to their first deal, the wait would be worth it, because they, along with Rex Brown and Phil Anselmo, created a new sub genre of Metal, making them the single most important Heavy Metal band of the nineties.  Pantera were to be the band that single handed SAVED Metal during the rise of the Grunge scene, and later Alternative music.

Starting with their fourth album, 1990’s Cowboys From Hell, Pantera burst out like a goddamn raging bull with tracks such as the title track, “Psycho Holiday”, “Heresy” and everyone’s excuse to mosh, “Domination”.  There are other classics on there that I could’ve named just now but I chose the ones I just mentioned because those tracks are filled with an extraordinarily seamless combination of interlocking with…groove??  Oh yeah, Vinnie never lost the groove no matter how mechanical or technical those tracks were.  He’d explain years later that, while he respected drummers with fast left hands (think blast beats), he was more concerned about making people move.

1992’s Vulgar Display Of Power saw Pantera develop a much edgier sound all around.  I mean they were already edgy, but starting here the band were starting to sound more like the soundtrack to a fist fight!  Between Phil’s rougher vocal delivery to Diamond Darrell…as he was unfortunately still calling himself at the time…downtuning his guitar and those drums.   Unlike most Thrash bands, Pantera were not JUST about precision and speed.  Vinnie Paul as a drummer was more than JUST an anchor.  He knew when to keep it tight and he also knew when to let loose and just go with the shuffle:

With tracks such as this one above, and “No Good (Attack The Radical)”, you started to hear Vinnie’s creativity.  There are syncopated rhythms in “No Good” that sounded so new.  They’d also be the basis for shitty nu metal bands later on but I’ll get to that soon.

1994’s Far Beyond Driven.  Without question it’s THE most important album in Pantera’s history.  Why?  Because it debut at No. 1 on the Billboard charts.  No Metal band before Pantera had EVER pulled that off before and now no one could EVER take that away from them.  It is also the HEAVIEST album to EVER debut at No. 1.  With the opening track, “Strength Beyond Strength”, your ass is kicked immediately.  It’s one big explosion and Vinnie’s much louder, much more POWERFUL drums are taking full charge.  Sounded like Vinnie had done some tinkering in the studio, both with his drum kit, as well as with the mixing board.   I mean goddamn – just listen to this fucking track!!!

I said earlier that to be the best you had to find your own sound among other things and Vinnie’s drums sounded so much deeper than on any other album up to this point.  Turns out he in fact was tuning his heads real low…like almost to the point of being loose.  And those bass drums!  They sound so triggered.  But as the story goes, while in the studio, Vinnie used wooden beaters in the studio and also taped quarters on his bass heads, right at the spot where the beaters would make contact.  The result was a clicky, yet stronger, clearer, more powerlful bass drum.  It’d also set the tone for the way many other, far more extreme Metal bands would record in the years to come.

If his brother, who was finally going by Dimebag at this point, was to be my generation’s Eddie Van Halen, then Vinnie was to be my generation’s Alex.  Both were brothers, both played together for so long that they could read each other’s minds with ease.  They both understood each other.  But on the downside, Alex, amazing as he was, was clearly destined to be overshadowed by his game changing brother.  Vinnie would be no different.  Dime’s playing and his SOUND were a MASSIVE game changer at this time, and rightfully so.  But every guitarist, bassist, or even singer are only as good as their drummer.  Eddie would’ve been just some asshole who taps had it not been for Alex.  Dime would’ve probably just been a guy with a scooped sound and a whammy bar had it not been for Vinnie.

Take for example “13 Steps To Nowhere” off 1996’s The Great Southern Trendkill.  This unmistakably is THE darkest, most intense album in Pantera’s entire discography – and my personal favorite!  It’s a headbanger for sure, very Sabbath inspired with just enough technicality to justify it as old school to the core.  It sounds like Vinnie here perfected the trigger sound on his bass drums, and found just the right EQ setting for his low tuned toms, as they cascade from high to low before Phil’s fucked up verses.  Right in the middle, the Sabbath moment takes over as the song breaks down beautifully, allowing Vinnie’s drums to breathe.  You hear every nuance, every reverberation, every BOOM.  It’s pure destruction.  It’s so sexy.

Then a problem arose in the music world.  In the four years between the release of ‘Trendkill and their final album, 2000’s Reinventing The Steel.  Starting with KoRn, actually going back to ’94, several “Nu” bands came along and tried to focus strictly on groove.  The guitarists all had a scooped sound, they all tuned down lower than even Dime thanks to the revival of seven string guitars; the drummers were playing nothing but snycopations, especially shit bands like Disturbed; and the singers all wore green shorts like Phil and were all just angry without a cause (well to be fair Jonathan Davis was apparently molested as a kid).  Unfortunately, Pantera were to get the blame for this, as most of these fuckers freely cited Vulgar as a major influence.

But the biggest problem with all those fuckfaces – and the biggest reason music SUCKED in the early 2000’s – was that they completely missed the point.  Pantera as a band, and as individual musicians, took close to a decade to perfect their sound.  Did any of them understand that Dime and Vinnie were insanely talented musicians since they were kids?  Did any of those retards know that Pantera started out in 1983 as a GLAM band??  Oh it’s true.  It took years for them to develop into a harder sounding band.  It also took the drive to always want every album to be better and better.  Thanks to their refusal to truly do their homework – and actually learn to play their instruments – these Nu/Rap Metal pieces of shit chose to just be followers…and ultimately forgettable.  Thankfully.

After the break up of Pantera in 2003, Vinnie and Dime went on to form Damageplan.  Their sole album, 2004’s New Found Power, was a major change in their sound.  The brothers wanted to try something new and while I surely wasn’t a fan of all the track on the record, I understood that this was an experiment and perhaps things would change.  I was however a fan of a the beyond sludgy “Moment Of Truth”.  It’s so slow, so heavy and it allowed Vinnie to sound like nothing short of a fucking jackhammer.

Unfortunately, as we all know, that second album would never happen, as Dime was gruesomely murdered before years end while on stage.

Vinnie stayed away from the public for a few years afterward.  His final band would be Hell Yeah.  I’ll be honestly.  I don’t mean to disrespect Vinnie, but he could’ve done so much better than joining a “supergroup” with the assholes from Nothing Face and Madvayne.  If he enjoyed himself, then hey good for him.  But I personally found Hell Yeah to be so beneath what he was capable of.

His unexpected death last Friday marked the end of en era, and a musical dynasty.  If you’re new to this blog you’re expecting me to say some shit like “he’s with Dime now”.  Not here.  I’m athiest.  I don’t believe that shit.  But with his death, gone are the one family that were as successful and ultimately as influential as they were playing this kind of music.  No one before the Abbott brothers could pull it off and no two brothers have repeated it just yet.  Vinnie Paul alone changed the game with his signature sound, and many drummers will say that they started playing because of Vinnie Paul.  In fact, while in the middle of writing this I stopped to write a new Spotify playlist, featuring my favorite Vinnie Paul moments in Pantera and even Damageplan.

To end this I’m going to leave you with the very first Pantera video I ever watched back in 1996 on an episode of Beavis and Butthead.